“[The final selection process] is open for everyone. When organizing the national team, it is of special importance to strike an ideal balance between experienced players and young energetic ones. We need more passionate, eager players right now.”

“I am aware of criticism directed to certain players lingering since the World Cup. At the center of it, there stand Park Chu-young and Jung Sung-Ryong. It is not right to rule them out just because of their non-performance in the World Cup. As long as they prove their worth in the current league in which they play, they should be reconsidered. It’s better not to make criticism based on past performance.”

“I prefer a score of 2 to 1 to 1 to zero. A 2-to-1 win is better as it is an offensive game and it means players can make mistakes sometimes. That also means you can still win a game even though you allow a goal.” 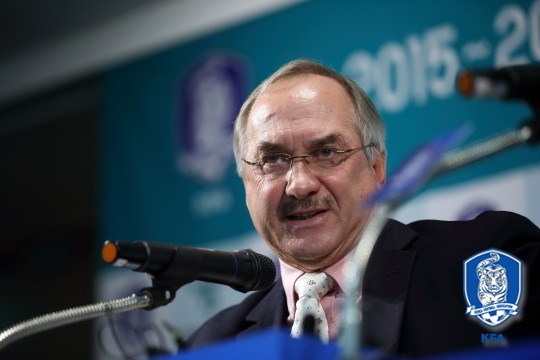 Mr. Stielike said, “We selected the final entry members for the Asian Cup solely based on the current performance of each and every player.” (image: KFA)

SEOUL, Dec. 11 (Korea Bizwire) – Uli Stielike, the South Korean national football team manager, said about the prospect for the upcoming 2015 AFC Asian Cup to be held in January next year in Australia. He held a press conference on December 10 at the Korea Football Association building in Seoul’s downtown and revealed his plans for the January tournament and the 2015 EAFF East Asian Cup scheduled in August.

Mr. Stielike said, “We selected the final entry members for the Asian Cup solely based on the current performance of each and every player. The purposes of the off-season training are twofold: to check the shape of the players and to discover young budding players in preparation for the East Asian Cup.”

He repeated the current finalist list is just tentative and may be changed at any time before the January game. He stressed, “There is no telling whether several others will be added to the list later. I have a principle to which I strictly follow. That’s anybody who shows good performance can join the team. For example, those on the disabled list such as Lee Dong-gook and Kim Shin-wook can come back anytime as long as they can run well.  I hear Ji Dong-won has just recovered from injury. The door is open for everyone.”

Stielike also mentioned the possible future of Park Chu-young and Jung Sung-Ryong who have been under controversies for some time. He said that any player who has proved his worth in the current league in which he plays even though his performance was not so stellar in the World Cup this summer. He also explained the difference between the scores of 1 to zero and 2 to 1 and said the latter is better as it is an offensive game and has a potential for winning even though you allow a goal.