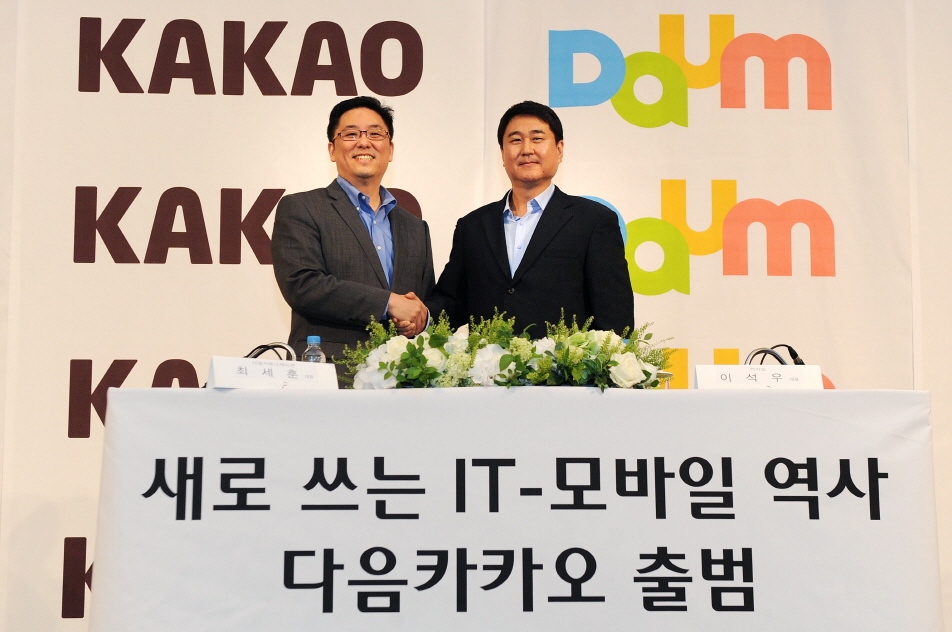 SEOUL, Oct. 1 (Korea Bizwire) — When Kakao Corp. launched its mobile chat application KakaoTalk in South Korea in early 2010, what lured users most was the fact that it was free. Until then, sending and receiving text messages via a phone had been considered something that you had to pay for.

The instant messenger, now used by three in every four smartphone owners here, has effectively changed people’s perception of text messaging. It’s almost taken for granted these days that mobile chatting is out there at no cost.

Analysts say, however, “free” is no longer a viable card Kakao can play, since it’s tasked with improving profitability for long-term growth.

With Thursday marking exactly a year into the merger with Daum Communications Corp., the operator of South Korea’s No. 2 search engine, achieving such a goal doesn’t seem to be too big a burden for the venture firm, as its latest push to reshape itself with a new head and change its name to Kakao Corp. — following a slew of new platform launches — have been a testament to its strong drive for monetization, they say.

When the newly merged Daum Kakao officially set sail Oct. 1 last year, Choi Se-hun and Lee Sirgoo, the two co-CEOs at the time, envisioned the company as a provider of “mobile life platforms,” vowing to come up with various mobile tools that can come in handy for users on an everyday basis.

And it has done so over the past year, churning out fresh items and seeking to expand its business portfolio here and abroad. It unveiled BankWalletKakao, a mobile wallet equipped with a remittance function, only a month after the merger, which got industry watchers to speculate that it’s preparing to tap into the finance sector.

Their prediction eventually hit the bull’s-eye. The Kakao-led consortium has tendered its bid for an Internet-only bank to the local financial watchdog, that’s due to announce two licensees by the end of this year.

In March, the company launched KakaoTaxi, a cab-hailing app similar to the U.S.-based Uber, but somewhat less controversial since Kakao was smart enough to forge a partnership with local industry guilds for licensed drivers before it rolled out the service.

Among the latest apps like the in-chat search tool Sharp Search and the newsfeed-sharing KakaoChannel, KakaoTaxi has been the biggest success for the firm since the merger, drawing over 140,000 subscriptions from cab drivers, with customer calls hitting a cumulative 20 million in the past six months.

Yet such a period of exploration seems to have taken its toll on Kakao, whose shares have sunk nearly 10 percent since the October merger with the already listed Daum,  which opened a door for Kakao for a backdoor listing.

Kakao’s market capitalization, which started off at 7.8 trillion won (US$6.6 billion), had tumbled to 5.9 trillion won at one point in May before it gradually crawled back to the previous level.

Analysts cited increased costs while keeping its policy of offering most platforms for free, as what brought the stagnation.

“When you roll out more products, your spending spikes on marketing expenses,” said Jeong Yong-jei, an analyst at Mirae Asset Securities Co.

Kakao posted a 62 percent on-year decline in its second-quarter net profit, with operating income shrinking more than 80 percent in the same period. A continued drop in sales from its faltering mobile games business also weighed on the bottom line due to heightened competition.

“Kakao was the first mover in mobile games with the Anipang jackpot, but it fell behind bigger rivals like Naver, who joined the race later with a long purse that it spent big on advertising,” he said.

Despite the dim results, analysts paint a rosy picture for Kakao, saying its efforts to monetize key products and new tools are expected to bear fruit.

Kakao is anticipated to start a high-end taxi-booking app later this month and a mobile chauffeur service early next year, which analysts say will become very lucrative profit sources since they can be run on a fee-basis.

“If KakaoTaxi was a test bed to understand the market and potential demand, it’s proved that its 38 million KakaoTalk users want another app like that,” Jeong said, projecting that the two new services will likely be the biggest contributors to improving the firm’s profitability.

Kakao’s game business is also forecast to make a turnaround from the fourth quarter, on the back of new releases and its expected entry to the web board game genre, according to latest analysts’ reports.

Kakao closed up 1.19 percent at 127,400 won on the tech-heavy KOSDAQ market on Thursday, emerging as the top-cap company on the secondary bourse with its market value reaching 7.6 trillion won.’

Eyes are also now on new CEO Rim Ji-hoon, who officially took the helm late last month. He needs to prove to shareholders that Kakao founder and incumbent chairman Kim Beom-su’s bold pick of the 35-year-old entrepreneur was the right choice for the company.

Analysts predict that given Rim’s reputation as an aggressive adventurer, Kakao under his single leadership will likely ramp up its push for business expansion, possibly through more takeovers, which is a well-known area of his expertise.

“I will strive to boost the global competitiveness of Kakao by improving speed and focusing on delivering our theme of mobile lifestyle and connection,” he said last month in a press release following the board’s approval of his appointment.