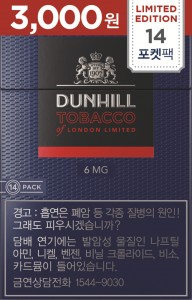 BAT Korea announced on February 6 that it would launch a limited edition called Dunhill Pocket Pack, a 14-cigarette pack for 3,000 won (US$ 2.75). (BAT Korea)

BAT Korea announced on February 6 that it would launch a limited edition called Dunhill Pocket Pack, a 14-cigarette pack for 3,000 won (US$ 2.75).

Although the pack is smaller — most packs have 20 cigarettes — the seemingly inexpensive price might be an appealing selling point  in South Korea, where many smokers have decided to quit or cut back due to the government-led price hikes that came into effect at the beginning of the year.

The effectiveness of BAT Korea’s pricing tactics remain to be seen, but foreign cigarette brands have generally turned out to be major beneficiaries of South Korea’s cigarette price hike policy.

Many foreign brands have reduced prices for their products, which has helped to win over local consumers. BAT marketed its Vogue brand at a low price of 3,500 won per pack, which is cheaper than the prices of most South Korean cigarettes, which currently sell for 4,500 won.

Philip Morris also jumped on the price-reduction bandwagon, adjusting prices of its Marlboro and Parliament brands by 200 won each.

If BAT Korea’s bet on the ‘compact pack’ is successful, it is highly likely that their competitors will employ similar tactics, according to market watchers.