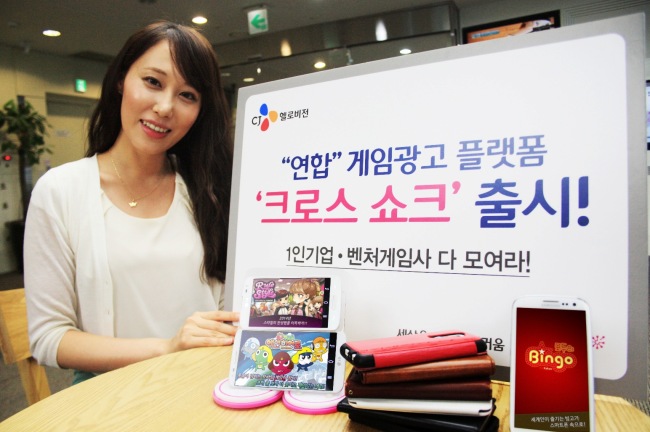 Until now, placing an advertisement within another game has cost a small game venture an arm and a leg, but now with the service, two games can “cross-advertise”, which means that they can advertise for each another simultaneously within their own games without charging anyone. (image: CJ Hellovision)

CJ Hellovision announced on August 20 that they have co-developed “Cross Shock”, a free mobile game advertisement platform, with a startup “Alice Shock”, and are about to commercialize it.

“Cross Shock” is an advertisement service in which small-sized game development companies can promote their games for free-of-charge. The system works as small and mid-sized game providers mutually benefit from advertising for one another in their own games.

Until now, placing an advertisement within another game has cost a small game venture an arm and a leg, but now with the service, two games can “cross-advertise”, which means that they can advertise for each another simultaneously within their own games without charging anyone. The service also allows small game enterprises to carry out promotion events such as gifting with items when users first download games or offering giveaways, which is affordable by only large and prosperous game developers.

Not only does it serve as a free marketing platform, but the CJ’s new supportive service also provides additional services that small game companies most need, including marketing consulting, cloud servers and their management, QA support to manage their game quality.

A manager of CJ Hellovision said, “The Cross Shock service utilizes a collective network of multiple game companies and therefore, small and mid-sized companies can relish stronger marketing effects and secure more users. We plan to continue to search for ways to support startups and ventures mainly using vision cloud technology which is optimal for mobile games.”

The service’s capability has already borne some fruits. An official from the company of a game “For the Honor of House”, which has used the service in a trial basis, said, “The download rate of our game which had been retaining a single digit number, jumped to over 50 percent after the implementation of Cross Shock. An upward trend has been conspicuous in the popularity rankings as well, as our rank took a hike over 20 steps after our game was advertised via Cross Shock.”