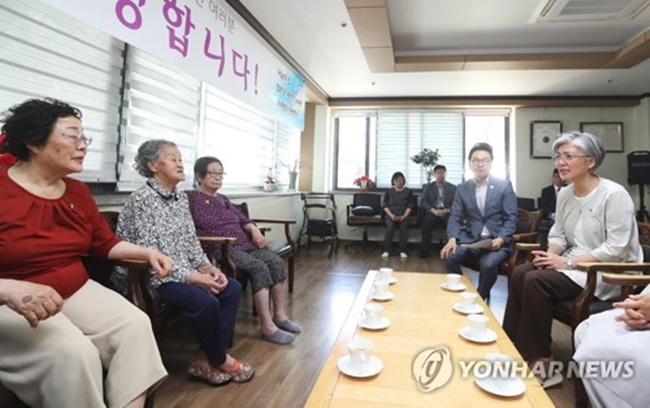 Known for her expertise on human rights at the United Nations for the past decade, Kang was recently tapped to lead the country’s foreign ministry. A confirmation hearing for her is scheduled for next week. (Image: Yonhap)

SEOUL, June 2 (Korea Bizwire) – South Korea’s foreign minister-designate said Friday that the victims should be at the center of any efforts to resolve the long-running dispute over Japan’s wartime sexual slavery of Korean women.

Kang Kyung-wha made the remarks following her earlier visit to a house sheltering some of those victims.

Known for her expertise on human rights at the United Nations for the past decade, Kang was recently tapped to lead the country’s foreign ministry. A confirmation hearing for her is scheduled for next week.

The remarks are seen as her critical stance on a 2015 deal reached with Japan aimed at putting an end to the decades-old rift over the issue of the so-called comfort women, a term referring to those forced into front-line brothels for Japanese troops during World War II.

Under the deal, Tokyo expressed an apology for its colonial-era atrocities and agreed to contribute 1 billion yen (US$9.97 million) to a foundation dedicated to supporting the surviving victims of sexual slavery. The organization was launched last year.

Critics doubt the sincerity of the apology as Japan refused to recognize its legal responsibility for the forced mobilization of the women. They also criticized that the deal was hastily arranged without sufficiently seeking the opinions of victims.

Earlier in the day, Kang made a visit to a house in Gwangju, just south of Seoul, that shelters some victims of Japan’s sexual slavery.

“I should have been there (the shelter) already regardless of my status,” she said. “I wanted to see them and hear what they have to say. I was deeply impressed. Their voice still remains vivid in my ear.”