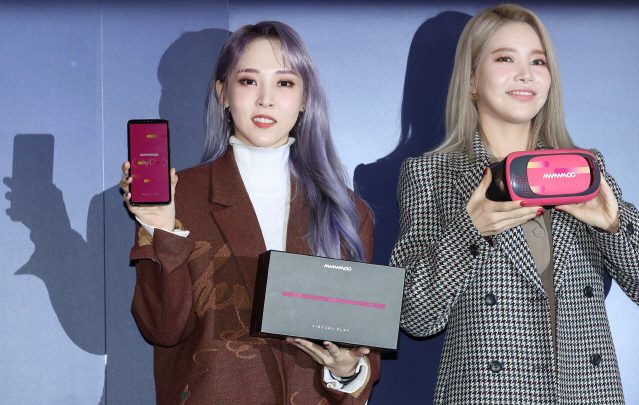 Priced at 55,000 won (US$46.10), the VP kit comes with a Mamamoo photo album, a SD card and a head mount display, allowing buyers to enjoy five Mamamoo performances in virtual reality.

It officially goes on sale on Dec. 19 at online stores.

Harnessing the power of VR and augmented reality technologies, the VP program provides a 360-degree panoramic and zoomed-in view of Mamamoo performing five of its songs as if “they are performing right in front of you,” according to Genie Music CEO Cho Hoon.

“The video was directed to look as if the artists make special motions toward you. … You may also be able to have a special experience of having eye contact with the members,” Cho said in a press conference Tuesday.

“Culture content like pop music performances and exhibitions is one of the optimal subjects for VR (products) … which have an explosive potential for growth with the inroads of the 5G era,” Cho noted.

“K-pop, in particular, has grown into the world music industry’s mainstream, pushing up the consumption demand for in-person experiences of K-pop performances,” he said.

Currently, Genie Music is in discussion with the management agencies of other K-pop artists to create more VR content, according to the company.

It also plans to come up with VR content featuring live concerts of K-pop stars, as well as musicians from outside of Korea.

Eventually, Genie Music seeks to develop the service into a subscription-based program, getting reborn as an augmented reality content provider, Cho said.