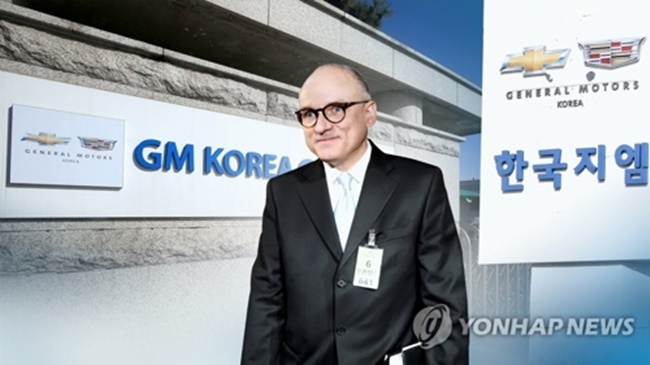 In a closed meeting with union leaders on Monday, GM Executive Vice President Barry Engle said the two sides badly need to sign a wage offer by the end of this month, even if it is a tentative agreement, as creditors want GM Korea and its union to reach an agreement on a self-help plan by April 20, according to GM Korea.

Unless GM Korea submits its self-rescue plan to creditors led by the state-run Korea Development Bank (KDB), there will be no financial support from the KDB-led creditors. The company may go bankrupt due to a serious credit crunch, the GM executive warned.

GM Korea needs about 500 billion won (US$465 million) by the end of April to cover severance payments and other expenses. Some 2,500 employees recently applied for voluntary retirement in exchange for severance pay and cash payment equivalent to years of salary, the company said.

GM Korea requires a total of 2.3 trillion won, including the 500 billion won, by the end of April to pay debts to its U.S. parent firm and other GM affiliates.

After announcing its plan last month to shut one of its four car assembly plants in Korea by May due to low productivity, GM said it can inject fresh capital into GM Korea if the loss-making Korean unit accepts a wage freeze and no bonuses. It said the company will move to suspend some benefits, such as school tuition for employees’ children and free lunches.

The 3,000-member union said they can accept the wage freeze and no bonuses, but the concessions will be based on the condition that GM cancels its “unilateral” plan to shut the Gunsan plant, provides 30 million won (US$28,000) worth of GM Korea stocks per employee after the U.S. parent firm’s debt-to-equity conversion, extends the retirement age to 65 from 60 and doesn’t cut jobs for the next 10 years.

In response, GM Korea came up with a revised wage offer. The company said it will continue to provide commuter buses and free lunches to assembly line workers and won’t adopt the planned limit on the number of children subject to school tuition to two.

In its global restructuring efforts, GM announced the plant shutdown plan in the country last month and asked the KDB to extend a helping hand to its carmaking unit.

The lender is the second-biggest shareholder in GM Korea with a stake of 17 percent, with GM and SAIC Motor Corp. controlling 77 percent and 6 percent, respectively.

If Seoul offers financial support, GM said it will convert into equity all of the outstanding US$2.7 billion debt held by the U.S. carmaker, fund its portion of a planned $2.8 billion investment in products and facilities and allocate two new vehicles to its Korean plants.

PricewaterhouseCoopers is currently conducting due diligence on GM’s Korean operations on behalf of the KDB, with an aim to complete the review by the end of April.

Meanwhile, KDB said it can provide short-term loans to GM Korea as the company will face a “cash crisis” during the first quarter.