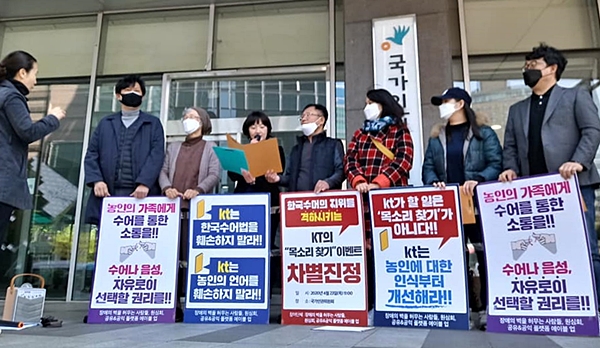 Those participating in the protest claimed that others have significant negative perceptions of sign language, and the KT advertisements only strengthened these false perceptions. (image: Civic Group)

SEOUL, April 24 (Korea Bizwire) — A group of hearing-impaired individuals filed a petition with a human rights watchdog against telecom giant KT Corp.’s campaign to restore the voices of the deaf with artificial intelligence (AI) technology, claiming that it “damages the value of sign language.”

Members of a civic group held a press conference in front of the National Human Rights Commission building in Seoul on Thursday to denounce KT’s campaign, saying that even good technology could cause problems if it ignores the situation and perceptions of the parties involved.

KT’s campaign is a project that aims to present a “first voice” to the deaf.

The AI voice synthesis technology identifies the voices of hearing-impaired family members and the oral structure of the person concerned, and deduces the voice to restore hearing.

“The language of the deaf is sign language. However, if you look at KT ads, there is a risk that the deaf seem to want voice language, not sign language,” Kang Jae-hee, who suffers from a hearing disorder, said through a sign language interpreter.

Kang added that KT should be aware of situations in which there are discriminatory perceptions of sign language.

Those participating in the protest claimed that others have significant negative perceptions of sign language, and the KT advertisements only strengthened these false perceptions.

In a related development, Kang said that KT advertisement could give the impression that a life with sign language is incomplete and only living with voice language is normal.

“The sign language law was enacted in 2016 and sign language has an equal status to the Korean language. Unfortunately, sign language is neglected due to its negative perception and government indifference,” said Kim Yoo-jin, who is also hearing-impaired.

“What we need is not to find our voices through AI technology,” Kim added, stressing the need for an environment in which we can be respected for who we are and be together as members of this society.