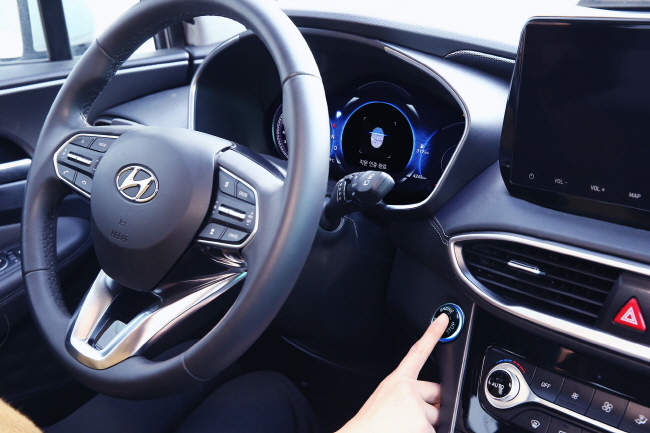 The start button has fingerprint recognition, allowing the driver to start the vehicle only after the fingerprint has been recognized. (image: Hyundai Motor)

The company will first launch the system on the new Santa Fe, which will be introduced in China in the first quarter of next year, after which the feature will be expanded to the global market.

Drivers will no longer need a key to open or start their cars as long as they have their fingerprints pre-registered to the vehicle.

Placing a hand on the door handle will activate a sensor that will transmit the fingerprint to a recognition device, which will automatically open the door.

The start button also has fingerprint recognition, allowing the driver to start the vehicle only after the fingerprint has been recognized.

The system also automatically applies customized settings for each fingerprint, such as the location of the driver’s seat, or the angle of side mirrors.

While fingerprint recognition technology has been used to start cars for some time, using fingerprints to open a car has been difficult to implement due to security and durability reasons.

Hyundai resolved the security issue by having the system recognize the capacitance of the human body.

There is only a 1 in 50,000 chance that a driver will be mis-identified, which is five times more secure than standard smart keys.

Hyundai Motor, in collaboration with a fingerprint sensor manufacturer, acquired AEC-Q100 qualification for the system.

The company plans to add various smart technologies, such as Near Field Communication (NFC), to the system in the near future.