SEOUL, Dec. 12 (Korea Bizwire) – Although ‘Interstellar’ has been seen by 10 million people in South Korea, a small independent documentary about a couple in the last moments of their 76 year marriage, is set to dethrone Christopher Nolan’s 165 million dollar space drama.

The small budget documentary with a rather lengthy title – ‘My Love, Don’t Cross That River’ – is a surprise hit among Korean cinemagoers right now, drawing in spectators at a record rate for Korean independent films.

The film opened with limited distribution in South Korea, appearing in only 153 theaters. However the film bewitched Korean audiences, and is now screening at 281 theaters. As more and more people are reserving tickets to see this most unexpected couple, the film is expected to continue to break attendance records.

How could this be possible, when the cinema scene is abundant with romances between young, beautiful, actors and actresses? What is it in this film that attracts people? First of all, the two seniors do a good job of showing young couples what romance really is. They playfully throw fallen leaves at each other because they can’t just sweep leaves normally in their yard without showing affection in a most loving way. And on the day of the year’s first snowfall, of course, they have a snow fight. 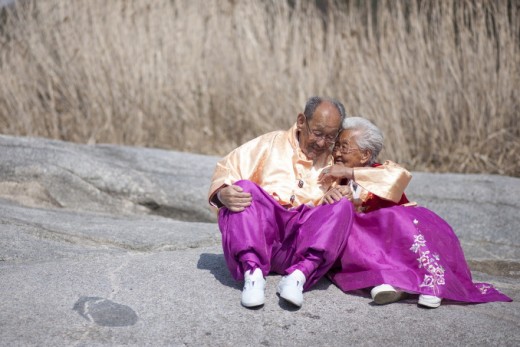 Still image from the film ‘My Love, Don’t Cross That River’

Also, can you imagine an old man singing in a soft voice in front of an outhouse, for the sole purpose of calming his wife who is too afraid to enter at night? They can’t even fall asleep without holding hands and caressing each other’s faces. It is an amazing experience to witness them showing such youthful passion and respect for each other after 76 years of marriage. That’s right – almost eighty years of marriage.

The director of the film, Mo Young Jin, said that he decided to feature the couple after seeing them in a TV documentary. The TV documentary itself was a hit among viewers. He wanted his film to convey a most unexpected trait about a senior couple. We have a tendency to expect a story to deal with death when it is about old people. However, the director said that he wanted the story to be about “love with no ending.”

‘My Love, Don’t Cross That River’ was first seen at the DMZ International Documentary Film Festival in September, playing to a full house. It received rave reviews and a prize at the festival.

One thought on “‘Interstellar’ Dethroned By … A Lovely Couple in Their Nineties?”