“My Love from the Star” is planned to be remade by America’s ABC. (image: SBS)

SEOUL, Oct. 17 (Korea Bizwire) — Korean television dramas have widely been beloved across Asian countries from China to Japan to the Philippines to Indonesia for the past few years with a series from “Autumn in My Heart” in 2000 to the most recent “My Love from the Star.” Now dramas from South Korea dubbed K-Drama started to carve the way to the United States, triggered by an Internet-based video streaming website called DramaFever.

DramaFever, founded by Korean-American Suk Park and Seung Bak in 2009, offers more than 15,000 episodes of dramas, TV shows and movies mostly from South Korea and some from other Asian countries with subtitles both in English and Spanish.

The website was originally made for Korean-Americans who want to watch Korean TV programs. According to online news website Vox, however, “85 percent of DramaFever’s audience is non-Asian, with 45 percent being Caucasians and 25 percent Latinos,” which means that a lot of people in the U.S. have already enjoyed Korean dramas through the website.

As the online streaming media armed with popular K-Dramas has grown to be lucrative, SoftBank, a Japanese telecommunications and Internet corporation, decided to acquire the streaming video service website. It means that the Tokyo-based company knows well about the potential of Korean cultural prowess. “We buy the website to help distribute popular video contents across the world,” said Masayoshi Son, CEO of the company.

SEE ALSO: “My Love from the Star” Set for American Adaptation

SEE ALSO: “My Love from the Star” to be Re-Created into a Mobile Game

K-Dramas are more than just being watched and appreciated. Adaptations of Korean TV programs have aggressively increased. The Korea Bizwire reported on September 21, “My Love from the Star,” which gained huge domestic and overseas popularity and created a syndrome called “Love from Star,” is planned to be remade by America’s ABC. Elizabeth Craft and Sarah Fain, who wrote “The Vampire Diaries,” are currently co-writing a pilot script.

On August 19, the online news outlet also made a report that WeMade Entertainment, Korea’s mobile game company, plans to “make their way into the Chinese game market with a mobile game adaptation of the drama,” showing that the realm of adaptations for K-Dramas is boundless.

Some Korean reality TV shows have been remade and aired in China. “Running Man,” one of the most popular South Korean TV variety shows, is adapted for a Chinese version dubbed “Run, Brother.” Another show program called “Where Are We Going, Dad?” which has been nominated for an Emmy Kids Award, has also been remade by a Chinese local broadcaster. Those remade programs are gaining huge popularity in China. 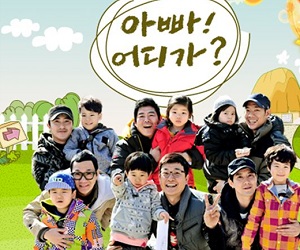 “Where Are We Going, Dad?” has been nominated for an Emmy Kids Award. (image: MBC)

According to a report conducted by the Korea Communications Commission, 1,002 TV program formats were exported abroad in 2012, rapidly up from 445 in 2011. Export volume of the contents was $1.29 million, up by 20.5 percent from $1.07 million during the same period. Aside from “Where Are We Going, Dad?” and “Running Man,” formats of various programs broadcast by major channels as well as cable TVs are exported to nations such as the U.S., China and Vietnam.

“Grandpas over Flowers,” an old men’s travel show by tvN, for example, is expected to be remade as an American version dubbed “Better Late than Never” by NBC. The program has already been adapted in China only to hit it big.

There are formidable challenges, however. The media industry in South Korea lacks a systematic approach and clear standards on export. Chinese video streaming website Iqiyi bought “My Love from the Star” from its production at the price of 518 million won, or about US$488,000. And yet, the China-based website has earned tens of billions of won by streaming the video and running ads.

“Now we are in a situation like one beats the bush and another catches the birds. Great media products produced by South Korean productions are sold at a giveaway price and then Chinese streaming websites resell it to earn huge profits,” Congressman Woo Sang-ho said. “In order to continuously develop our media contents and create higher added value, we need to come up with a Korean version of YouTube to pave the way across the world,” he added.