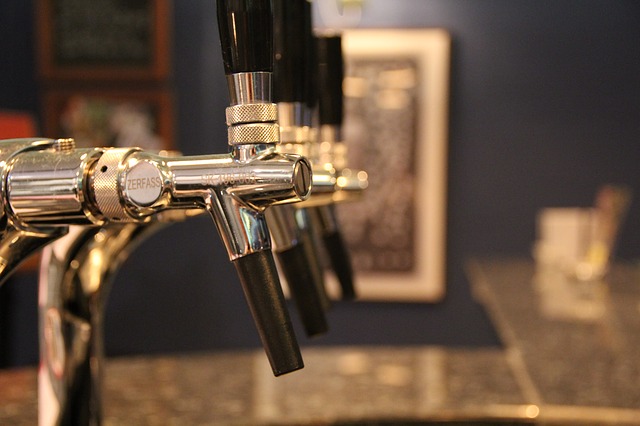 Local beer manufacturers are preparing a fierce battle to hold the title of the King of Beer in Korea. (image: abruellmann/pixabay)

SEOUL, Korea, April 15, 2014 (Korea Bizwire) – This year, there will be two big international sporting events such as the FIFA World Cup in Brazil and the Asian Games in Incheon. Traditionally, in the year with the big sports events, the sale of beer increased significantly as people would enjoy the games drinking beer.

With big events ahead and a competitive newcomer on the block, local beer manufacturers are preparing a fierce battle to hold the title of the King of Beer in Korea equipped with new lines of suds.

Since beer was introduced to Korea decades ago, two giants have dominated the 4-trillion-won market although there were fluctuations between the two. Now, Oriental Brewery Company and Hite-Jinro, which account for 65 percent and 35 percent of the market share respectively, are now ready to embrace a third challenger Lotte, a retail giant, which recently joined the market with the premium ale beer brand “Kloud.”

An increasing demand for imported beer has also threatened the giants. With the revision of alcohol tax law, the entry barriers to the beer market were lowered, which enabled microbreweries and even large ones like Shinsegae to get into the battlefield with their own house beers.

As consumers’ taste on beer becomes varied, new needs seeking new flavor have arisen. Thus, their preference to imported beer rose steadily and the portion of imported beer in the Korean beer market has increased year by year.

In fact, Korea imported some US$74 million worth of beer last year, a 26-percent increase from $58 million in the previous year. Recently, their share has passed the 30-percent mark in some big-box retailers.

To counter the trend, local beer manufacturers, which were criticized by some detractors as the makers of the world’s worst beers, are rolling out new ales or making renewal of the existing lines.

Recently, Oriental Brewery has introduced a British-style premium brand “Aleston.” With strong and rich flavors of malt, it aims to catch the taste of beer manias.

Jinro-Hite also introduced “Queen’s Ale” last September to preempt the ale market. In addition, in partnership with the World Beer Alliance, the company recently rolled out “New Hite” by reinforcing the feeling of refreshment and smoothness. 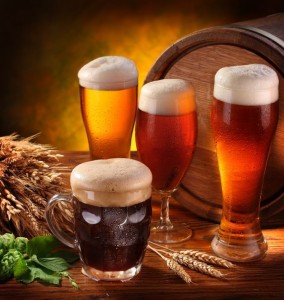 Traditionally, in the year with the big sports events, the sale of beer increased significantly. (image: Kobizmedia)

New Competition in the Market

Later this month, Lotte Brewery will take its first step into the beer market with its German-style premium beer “Kloud.” The 100-percent malt beer shows off rich cream and adopted an “original gravity” method, not mixing with water while brewing the beer.

With Lotte’s advance into the beer market, Oriental Brewery and Jinro-Hite are under serious pressure. With its distribution channels like Lotte Mart, Lotte Supermarket and 7-Eleven, it is expected to make an all-out war against the two behemoths.

As it is known that Lotte hired a large number of salespeople and will pour some 30 billion won for the initial marketing effort, the two incumbents are taking pains for the countermeasure.

An official at Hite said, “The beer market grew 2-3 percent annually and it is expected to grow at least 3 percent this year thanks to the big sports events. Lotte’s entrance into the market seems to enlarge the total market share not infringing upon the existing market.”

No. 1 beer manufacturer Oriental Brewery, which was recently absorbed wholly into the orbit of Anheuser-Busch InBev, aims to raise its market share not giving up any of its share to Lotte. With its flagship brand “Cass,” premium beer “Capri,” deep and rich flavor of “OB Golden Larger” and “Aleston,” it will concentrate on the global market rather than remaining in the domestic market. 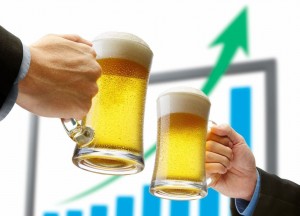 Fierce competition is expected among the major players and it remains to see who is going to come out on top in the game. (image: Kobizmedia)

An official at Oriental Brewery said, “’Export’ is our killer weapon that other competitors cannot dare to challenge. We are exporting $150 million of beer since 2012 to some 30 countries.”

Hite, which handed over its No. 1 title to Oriental Brewery back in 2011, feels more threatened this year with Lotte’s entry. As it is said that its market share dropped to near the 30-percent level recently, Lotte’s entry will hit it harder.

Amidst the crisis, Hite renewed its “Hite” brand and lowered its alcohol content to 4.3 percent. With the help from the World Beer Alliance, it will also try to raise its beer quality and cope with other competitors.

A market watcher said, “With Lotte’s joining in the market, fierce competition is expected among the major players and it remains to see who is going to come out on top in the game.”