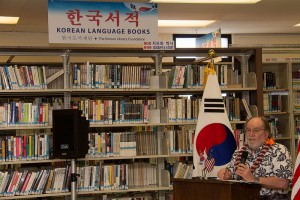 The renewed “Korea Corner” is part of efforts by Ministry of Foreign Affairs (MFA) to open ”Korea Promotion Centers” in major libraries and universities abroad. To this end, MFA has been supplying a variety of informational, educational and cultural contents using top of the line information technology to the targeted facilities around the globe. MFA has, in particular, mainly focused on 14 locations around the world including the Hawaii State Library. Reportedly Ministry of Foreign Affairs and the State of Hawaii arranged a joint matching fund for this project.

With this expansion, the new “Korea Corner” at McClly Library now boasts a collection of 20,000 latest Korean publications and 500 DVD’s of Korean movies and TV dramas. The local Korean Americans and others interested in Korean literature and history can also have easy access to the sources using the new e-book system.

Governor Abercrombie praised Korea’s excellent technology in his congratulatory message and added that he believed the American’s interest in Korea, which initiated from K-Pop, would spread to Korean literature and history through such installments. Consul general Paik also said he was glad that he was able to meet the demand by the Korean Americans in Hawaii whose immigration history just celebrated its 110th anniversary.