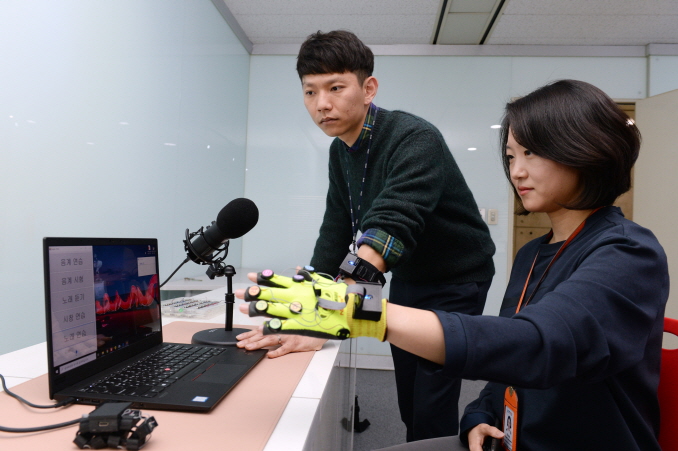 The new technology analyzes the pitch, which is the height of a sound from the surrounding environment, as well as voices, and converts it into a tactile pattern. (image: ETRI)

The new technology analyzes the pitch, which is the height of a sound from the surrounding environment, as well as voices, and converts it into a tactile pattern.

Cochlear implant surgery has allowed people with hearing impairment to communicate with the non-disabled, but it is difficult to distinguish high and low frequencies of sound, so there is a limit to listening to music and singing.

The technology developed by researchers at the Electronics and Telecommunications Research Institute (ETRI) extracts frequency signals from auditory information such as music and sound, recognizes the sound, and transmits it to users’ skin by transforming it into tactile patterns.

When one hears the sound of middle C (fourth octave), one can feel a vibration in the first joint of the index finger through a glove worn on the left hand. In this way, 36 notes are expressed on one side of the glove in tactile patterns. 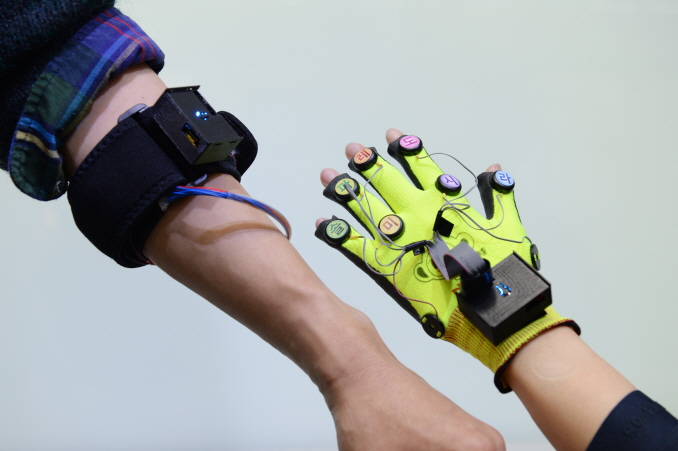 The research team conducted a month-long clinical study of two hearing-impaired test subjects who underwent cochlear implant surgery to produce a desired sound with their own voice.

Experiments showed that their ability to make the desired sound with their own voice tripled compared to without the use of the tactile aid.

The research team is pushing to develop wearable forms of the device, such as wrist bands, so that they can be worn comfortably.

“There is also a study that shows that music activities during language rehabilitation training can help improve understanding of speech language and sound,” siad Dr. Shin Hyung-chul, who was in charge of research project.

“This will help people with hearing impairment to participate in musical activities,” he added.