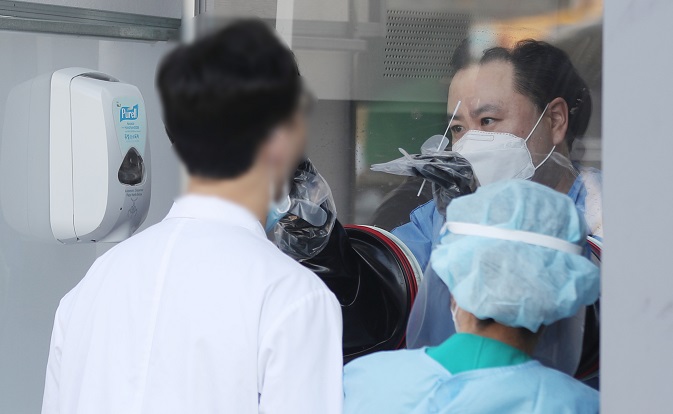 A doctor receives a new coronavirus test at a makeshift clinic in Gwangju, 330 kilometers south of Seoul, on Nov. 14, 2020. Chonnam National University Hospital in the city reported a COVID-19 case from one of its doctors on the previous day. (Yonhap)

SEOUL, Nov. 14 (Korea Bizwire) — South Korea’s new coronavirus cases exceeded 200 for the first time in 73 days Saturday amid lingering cluster infections across the nation, with health authorities considering raising the social distancing scheme by a notch in the five-tier system.

The country added 205 more COVID-19 cases, including 166 local infections, raising the total caseload to 28,338, according to the Korea Disease Control and Prevention Agency (KDCA).

The number of new infections stayed in triple digits for the seventh consecutive day. The daily new cases reached 191 on Friday and 143 on Thursday.

It marked the first time for the daily figure to surpass 200 since 267 cases added on Sept. 2.

The KDCA reported four additional deaths, raising the total at 492. The fatality rate came to 1.74 percent.

Health authorities attributed the sharp growth to chains of cluster infections from private gatherings and public facilities, which made it more complicated for them to identify the transmission routes.

The country faced another wave of pandemic in August, with the figure reaching 441 on Aug. 27 due to cases traced to another church in northern Seoul, coupled with an anti-government demonstration.

With signs of a possible slowdown, however, South Korea has kept the Level 1 social distancing scheme under a new five-tier system nationwide since earlier this month, although some cities and provincial governments upped their virus infection preventive measures.

Wonju in Gangwon Province and Gwangyang and Suncheon in South Jeolla Province also raised their social distancing schemes to Level 1.5 this week.

Yeosu, located 455 kilometers south of Seoul, is also among the regions that enhanced their guidelines.

In line with efforts to curb the spread of the virus, South Korea started slapping fines of up to 100,000 won (US$90) on people who fail to wear masks in public places.

Operators of those facilities and rally organizers will be fined up to 3 million won if they fail to ensure that users or participants stick to the requirement.

Among the locally transmitted cases, the capital city of Seoul accounted for 63 cases, and Gyeonggi Province that surrounds Seoul reported 46. The greater Seoul area houses around half of the nation’s population. 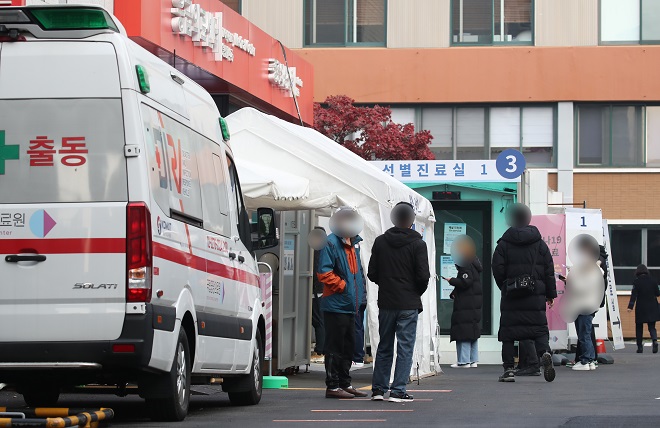 South Koreans wait to receive COVID-19 tests at a clinic in central Seoul on Nov. 14, 2020, as new coronavirus cases in the country exceeded 200 for the first time in 73 days. (Yonhap)

As of Saturday noon, a sauna in western Seoul reported eight more patients, raising the total to nine. A hospital in the area also reported nine patients.

In eastern Seoul, another nursing home added six more cases, with a total of 59 cases being traced to the facility.

A bank in Suncheon, 415 kilometers south of Seoul, added two new patients. A total of 10 patients have been reported there.

A prayer facility in Eumseong, 131 km south of Seoul, reported seven virus cases, while an elementary school teacher in Wonju, 130 km east of Seoul, tested positive, prompting health authorities to plan virus tests for some 600 students and teachers at the school.

“As small-sized, sporadic group infections are rising outside the Seoul metropolitan area, there’s a possibility that the country will raise the level of social distancing in some areas, should the current trend continue,” a health official said during a regular briefing.

Health authorities said the average daily new cases of COVID-19 came to 122.4 over the past week.

“Although the current situation is within a manageable level for our medical system, it is worrisome that it may spread further,” Moon said in a Facebook post.

Moon called for citizens to strictly follow mask guidelines, especially as the annual college entrance exam is only 20 days ahead.

Among the imported cases, the United States accounted for 10 cases, followed by Russia with six and Poland with five.

There were also cases from the Philippines, Bangladesh, Myanmar and Japan.

The number of seriously or critically ill patients came to 54, up four from Friday.

The number of people released from quarantine after making full recoveries came to 25,636, up 99 from the previous day. This indicates 90.4 percent of the patients reported here being cured.

Over the past two weeks, around 13.4 percent of the additional cases had unknown infection routes. Nearly 35 percent of the newly added cases were traced to cluster infections.

Health authorities, meanwhile, said its studies on 1,301 COVID-19 cases showed that the S and V strains of the new coronavirus were dominant through April, but mostly the GH strain has since been detected from a series of cluster infections.

Two cases were also infected with the GV strain, which has recently been categorized by the World Health Organization, they added.