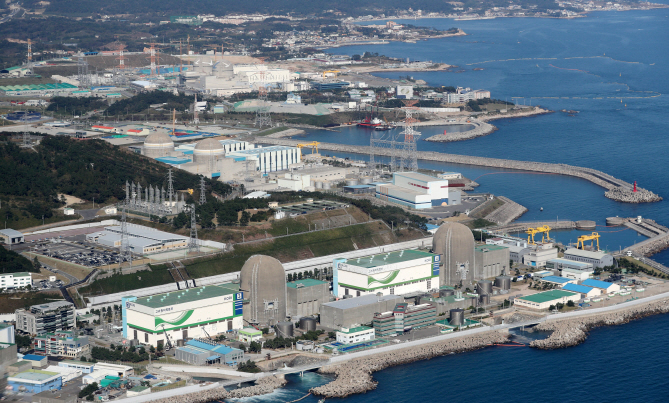 Korea Hydro & Nuclear Power Co. (KHNP), the public company charged with operating atomic energy production, said use of fission power stood at 65.9 percent of capacity in the one-year period, the lowest since 56.3 percent tallied in 1981.

Utilization numbers are calculated by total time in a year divided by actual hours that a nuclear power plant was online.

KHNP said that in the 1980s the country’s nuclear utilization rate stood in the 60-70 percent range, as engineers accumulated critical experience in the running of atomic power plants.

That number surpassed the 80-percent threshold coming into the 1990s. It stood at 85.3 percent in 2015, before falling for three years up till last year.

Related to the drop in numbers, the Ministry of Trade, Industry and Energy said discovery of maintenance issues caused operations to be suspended.

“Instead of the regular two months of maintenance, some plants have been shut down as long as a year, which affected operations,” a KHNP source said.

Others have said that because of the incumbent Moon Jae-in administration’s efforts to move away from nuclear and toward clean renewable sources of energy, state inspections have become more stringent compared with the past.

On the other hand, with “preventative maintenance” efforts to be scaled back this year, the utilization rate of nuclear power plants will likely return to normal in 2019.

The number of days set aside for maintenance work at the country’s 23 operational reactors stands at 1,422 days this year, or around half of 2,823 reported for last year.

Related to the prediction, local market watchers predicted that the nuclear utilization rate should rise to 83.3-84.8 percent this year, which is on par with the annual average.

It said the drop in days set aside to carry out maintenance at power plants is a sign that most safety examinations have been completed as remedial action is taken.

Full-fledged operations of the brand new Shin-Kori 4 nuclear reactor are expected to push up utilization.

This, however, is expected to expand in the coming years, as five reactors come on line going forward.