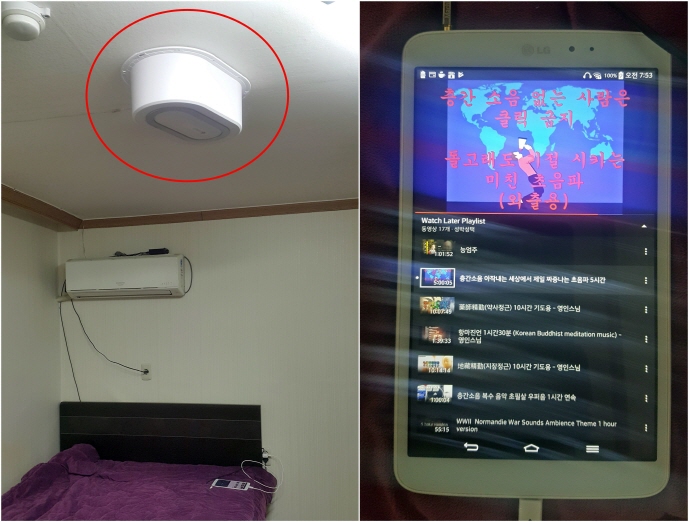 The speaker in question is designed to be installed on the ceiling and is equipped with an 8-inch woofer and has a maximum power of 120W. (image: Cheongju Cheongwon Police Station)

CHEONGJU, Mar. 11 (Korea Bizwire) — A complaint was filed at an apartment complex in the city of Cheongju, North Chungcheong Province for constant baby crying and non-stop noise coming from a downstairs neighbor.

The police visited the apartment complex after receiving a report that child abuse was suspected.

According to the complaint, there was a sound of baby crying and it sounded like someone was putting the baby into a washing machine and then turning it on.

When the police arrived, there was no one inside the house – let alone a baby. What made the sound of a baby was a speaker installed in the ceiling.

It turned out that the resident of the house had set the speaker to automatically play sounds including a baby crying, hammering, and a running washing machine every morning before going to work.

The two neighbors had a history of conflict regarding noise complaints. The downstairs neighbor, who installed the speaker, claimed that a dog upstairs made noise.

Although he complained to his upstairs neighbor, nothing changed.

The speaker in question is designed to be installed on the ceiling and is equipped with an 8-inch woofer and has a maximum power of 120W.

Similar speakers can be easily purchased online, with some popular models boasting hundreds of reviews.

The Cheongju Cheongwon Police Station announced on March 9 that it was investigating the case without detention on charges including assault.

As a police official put it, any act of intentionally making loud noises by installing a speaker on the ceiling in retaliation against the sound coming from above can be subject to disposition of notification and criminal detention under the Minor Offenses Act.

Furthermore, even if there is no physical contact, if victims suffer physically or mentally due to excessive noise, the crime of assault can be established.