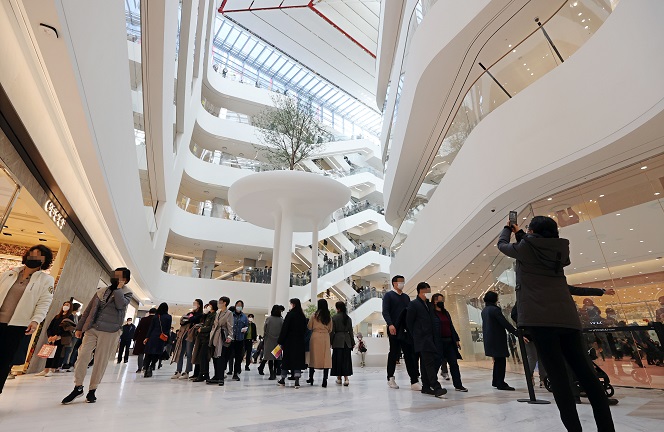 Visitors shop at the Hyundai Seoul department store in Yeouido, western Seoul, in this file photo taken on Feb. 26, 2021. (Yonhap)

SEOUL, March 25 (Korea Bizwire) — Retail sales in South Korea rose 10 percent in February from a year earlier on the back of the Lunar New Year’s holiday, with offline stores delivering better-than-expected performance as pandemic-weary people went outside.

The combined sales of 26 major offline and online retailers reached 11.6 trillion won (US$10.2 billion) last month, up from 10.6 trillion won a year earlier, according to the data compiled by the Ministry of Trade, Industry and Energy.

Sales from offline stores jumped a whopping 14 percent as people purchased gifts for the Lunar New Year’s holiday, which fell in January last year. It marked the first on-year growth since October 2020.

The rise also came as South Korea eased its anti-graft law temporarily for the holiday in order to beef up demand for agricultural products.

Local supermarkets saw their sales advance 15 percent over the period on strong demand for clothes and sports equipment, with consumers also buying gifts for their relatives instead of visiting them.

Online stores saw their revenue edge up 5.5 percent, snapping their two-digit growth posted since the early stage of the COVID-19 pandemic on a base effect.

Sales from online platforms shot up 34.3 percent on-year in February 2020 when the country suffered its first wave of the pandemic. South Korea reported its first patient in late January last year.

From online shops, sales of home appliances increased 10.9 percent on-year, but those of children’s products dipped 19.3 percent as people purchased them from offline stores.

The prolonged COVID-19 pandemic also led to a 3 percent decrease in demand for fashion items from online stores.