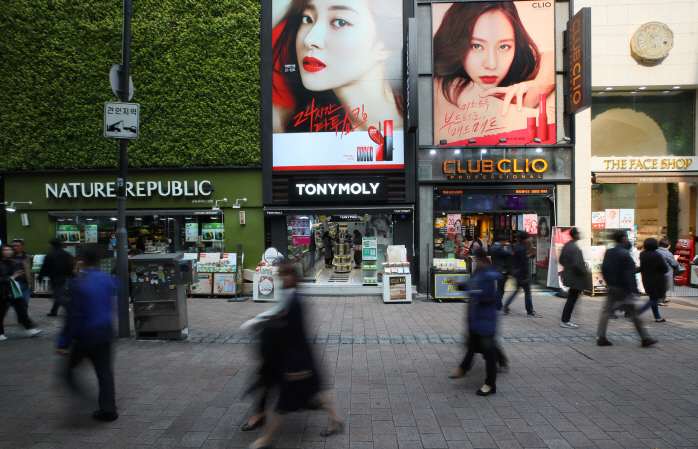 SEOUL, Jan. 28 (Korea Bizwire) — Retail cosmetics shops that have been the drivers of the ‘K-Beauty’ industry for the past 15 years are facing a crisis, exposing their limitations.

The cosmetics industry is undergoing a series of transformations due to decreased demand from China and a change in distribution structure resulting from stagnant domestic demand and increased competition.

Nowadays, it is common to see health and beauty shops (H&B) such as Olive Young and LOHBs reorganize and shift their main focus online.

According to cosmetics industry analysts on Sunday, the size of the cosmetics retail store market was 2.29 trillion won (US$2.05 billion) in 2017, which reflects a rapid decrease since a peak was reached in 2016.

It is estimated that total sales last year decreased by 15 percent from the previous year.

With sales decreasing, the industry is closing down branches. The number of retail shops for cosmetics in South Korea began to shrink in 2017 and is estimated to have fallen to 5,200 in 2018.

The company, once a huge hit with the phrase “Don’t eat, give it to your skin” entered corporate restructuring in October of last year having difficulty securing liquidity due to excessive debts.

Those who suffer the most in the process are franchise owners, who are protesting that the company is trying to avoid the worsening situation without taking responsibility.

The causes of the decline of the retail shop are numerous. The first reason is the excessive competition within the industry.

Add to this, China’s retaliatory actions as part of the THAAD missile crisis in 2017 led to huge decrease in sales.

Changes in distribution structure have also played a role. H&B shops are now leading the market, offering a variety of brands in one place, instead of a closed structure.

These types of stores are a gaining competitive edge as they can sell occupy low and medium-priced brands and new venture brands as well as establish strategic products.

Amid the economic slump, retail shops continued to grow in number as brands gradually added fast product launch strategies and functional products aligned with trends based on affordable prices.

Chinese tourists clearing out the shops in the wake of the Korean wave contributed to the growth of retail shops. However, in the current situation, retail shops are only beginning to restructure.

While some brands are choosing to downsize their branches, others have chosen to invest aggressively.

Those who chose aggressive investment plans in a bid to become global cosmetics companies hope to achieve economic success despite the difficult situation and uncertain prospects for the future.