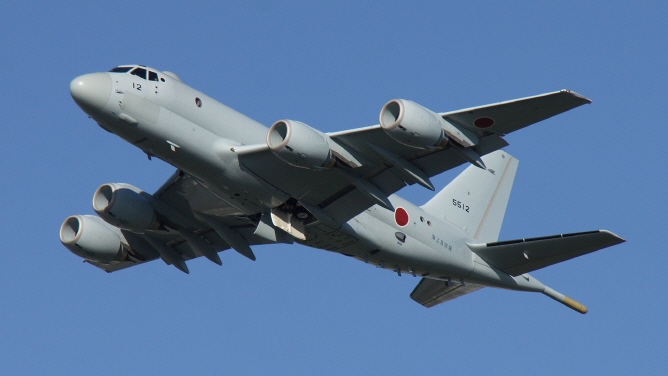 The latest row is shaping up to be a game of who is telling the truth, with the neighbouring countries exchanging blunt accusations. Although Seoul and Tokyo have a military information-sharing agreement, signed in November 2016, the two sides have refused to reveal some related secrets that would help reveal facts.

Seoul argued the ship was on a humanitarian mission to rescue a North Korean boat drifting in the international waters of the East Sea and that it used only ship-to-ship radar for the rescue operation and did not do anything to threaten the plane of its partner country.

Seoul has demanded that Tokyo offer a “smoking gun” — its analysis of radar frequency data to verify whether the destroyer sent the warplane any signals from its tracking radar. Tokyo rejected the call, saying it won’t offer sensitive information on its “operational capabilities.”

The dispute took a new twist on Dec. 28, when Tokyo released a 13-minute video clip showing the operation of its aircraft to back up its claim — a move over which Seoul’s defense ministry expressed “deep concerns and regrets.”

The footage showed an operator of the aircraft communicating a message to the South Korean Navy about its alleged discovery of the ship’s radar antenna directed at his plane in a relatively calm voice that observers say did not reflect a sense of urgency.

The operator was seen neither conducting any emergency maneuvers nor urging the Korean Navy to immediately halt the alleged radar targeting, in contrast to Tokyo’s characterization of the incident as a “dangerous act that could have invited an unforeseen turn of events.”

After weeks of taking a low-key approach to the matter, South Korea’s defense authorities have shifted to a more aggressive tone. They have openly urged Japan to apologize for the P-1 plane’s low-altitude flight, which was “threatening” to the South Korean warship, and ramped up criticism of Tokyo’s “unilateral, misguided” claims.

The war of words is expected to be protracted as Seoul is preparing to release its own video clip to highlight that Tokyo’s argument is untenable.

“We have requested an apology for the low-altitude flight and plan to continue to do what we can or what is necessary (to reject Tokyo’s claim),” Choi Hyun-soo, spokeswoman for Seoul’s defense ministry, told a press briefing on Thursday.

“We initially thought that the two sides could address this issue through objective, working-level consultations. … But we are now responding accordingly as Japan has continued to be misleading (with the public) about the facts,” she added.

“Behind Abe’s decision to push for the public release of the footage appears to be his displeasure over friction with South Korea over a set of sensitive issues,” Nam Chang-hee, a professor of diplomacy at Inha University, said. 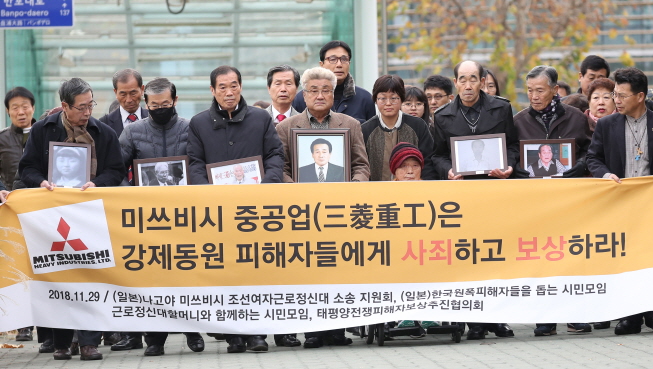 Victims claim they were tricked by their school headmaster into believing that they would earn lots of money if they enlist in the Korean Women’s Volunteer Labor Corps. (image: Yonhap)

Such mistrust between Seoul and Tokyo is largely attributable to a decadeslong row over historical issues, highlighted again by disputes over back-to-back Seoul court rulings last year against Japanese firms that forced South Koreans into hard labor during World War II and Seoul’s decision to dissolve a Tokyo-funded foundation for sexual slavery victims.

South Korea’s Supreme Court ruled in favor of victims of forced labor at the hands of Japanese firms during Tokyo’s 1910-45 colonial rule.

The court recognized the victims’ individual rights to claim damages, riling Japan, which has claimed all colonial-era reparation issues were settled through a government-to-government pact in 1965 that normalized bilateral ties.

Seoul’s decision to dissolve the foundation for former sex slaves has also heightened tensions. Tokyo wants to keep it, in line with a bilateral 2015 deal to settle the wartime humanitarian issue. But Seoul balked, saying it has failed to sufficiently reflect the views of the victims.

Speculation has also emerged that Abe may be trying to use the radar row to rally his core conservative supporters, some of whom felt alienated by his move to revise immigration laws to allow more migrant workers into Japan to help address labor shortages.

“That move has triggered a backlash from his support base, which has largely shown nationalist tendencies. … With the latest security issue involving Korea, he might have attempted to assuage the concerns of his rightist backers,” a foreign policy expert said, declining to be named.

Other analysts have raised the possibility that Abe could utilize the spat with Seoul to advance his security agenda, which includes heavier armament and a push for a constitutional revision aimed at becoming a “normal” state with a full-fledged military rather than its “self-defense” forces.

“Japan has cited North Korea’s threats and China’s military beef-up as the rationale for its armament, but it could also try to use potential threats such as those from a potential accidental clash with South Korea,” Park Young-june, a Japan expert at Korea National Defense University, said.

“When it seeks a hike in defense spending, military tensions (with Korea) could be helpful to sell its security policy to the domestic audience,” he added.

Some suspect that Tokyo has been doubling down on its criticism of Seoul after it failed to send its warship to an international fleet review in South Korea in October amid a dispute over its plan to hoist its Rising Sun Flag, which is seen as a symbol of its past imperialism.

With the spat plunging Seoul-Toyo ties to a new low, calls have also been growing that the two sides must seek a solution at a time when they need to cooperate over ongoing efforts for a lasting peace on the divided peninsula.

Washington, a mutual ally of Seoul and Tokyo, used to weigh in when the two sides engaged in major diplomatic tussles, seeking to strengthen its network of alliances to maintain regional stability.

But some observers have raised doubts over whether the current U.S. administration has the sincere will or capability to help diffuse tensions between its two core Asian allies, given that President Donald Trump appears to be employing a transactional approach to diplomacy.

“Yes, doubts remain whether Trump will play a role in (resolving) the Seoul-Tokyo row … with a strategic mind-set vis-a-vis the U.S. alliance network,” Nam of Inha University said.