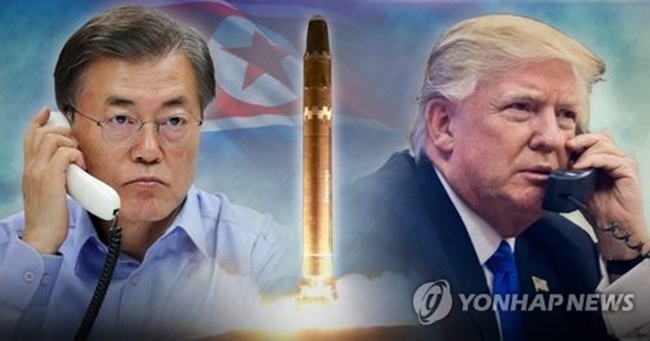 “The issue of a naval blockade was never mentioned in the phone call with President Trump,” the official told reporters, while speaking on condition of anonymity.

The possibility of a naval blockade surfaced immediately after North Korea launched a believed intercontinental ballistic missile (ICBM) in the wee hours of Wednesday, ending its 75-day hiatus in provocations.

Many experts said the idea is the only possible option available as Seoul and Washington have long been maintaining what they called “the strongest” sanctions and pressure against North Korea under bilateral and international efforts.

The Cheong Wa Dae official noted the countries continue to move toward maximum sanctions and pressure but said there are many other options left, such as a complete cut off of oil supplies to the communist state as suggested by Trump.

“I may not discuss every detail of the call between the two leaders, but I can confirm that there were no suggestions or discussions about military steps or a naval blockade,” he said.

The official also insisted the North’s latest missile provocation may not warrant a military action despite Pyongyang’s earlier claim that the launch was successful and that it marked the completion of building what it called a “state nuclear force.”

“We and the United States do not accept North Korea’s declaration of being a nuclear state itself,” the official said, adding the president, too, has stressed the need to first verify the North’s claimed success in its latest missile test.

In his second telephone call with Trump, the South Korean leader was quoted as saying the North’s claimed completion of developing an ICBM has not been confirmed.