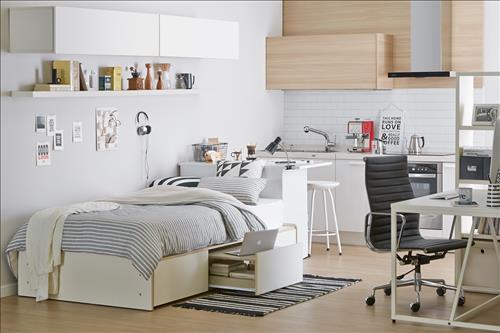 Hanssem launched a bed that contains a table and drawers, and is planning to launch sofas for one person in September. (image: Hanssem)

Seoul, July 17 (Korea Bizwire) – At a time when one in ten people are literally living ‘home alone’, products for single households are selling like ice cold water on a hot day.

According to 11st Street, an online shopping mall, the items that showed the fastest growth in sales were electronics for single households.

The sales of ‘Rice maker for one’, a product that cooks rice in a microwave, more than tripled compared to last year. ‘Triple frying pans’ that can cook three different types of food at once also showed a 75 percent increase in sales compared to the same period last year, and over one million 100 won single-use detergent packages had been sold only 10 days after their launch. In addition, meat and fruit products sold in small portions were hot sellers leading the growth of one-person products.

Sales growth was also observed in the restaurant industry.

Cheiljemyunso, a noodle restaurant produced by CJ FoodVille, launched a Shabu-shabu dish for one person in 2012. The dish was only available at one location at the time, but after its success, it can now be found at nine other Cheiljemyunso restaurants.

Ashley to go, the take out version of the Ashley salad bar & buffet, entered major department stores five years after its launch. Sales are said to have increased by about 10 percent each year.

Convenience stores are also launching new products under their new strategy of providing high-class products. In an attempt to break away from cheap and low quality microwave meals, 7- Eleven introduced the ‘Supper with 11 side dishes’ and GS25 demonstrated new attempts to serve upscale side dishes that could not be seen in products before.

It seems like the inconvenience of not being able to order food when eating out alone, and the misery associated with eating poor quality food out of plastic will no longer be a problem for single people.

In the real estate market, the increase of one-person households boosted the sales of one-room houses, most of which are around 350 square feet in size.
Sales are soaring not only in neighborhoods near colleges, but also in Gangnam.

Hanssem launched a bed that contains a table and drawers, and is planning to launch sofas for one person in September.

Livart furniture noted that their New Friend’s Dressroom (a closet that can be assembled in 96 different ways) and a table that transforms from a table for two to four are their most popular products.