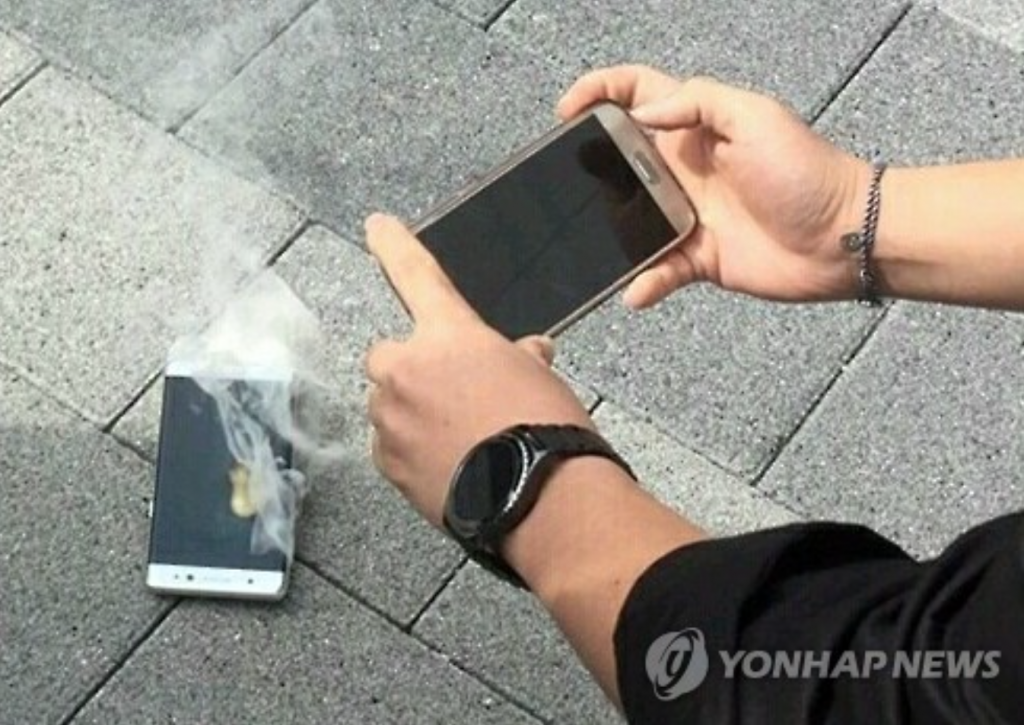 Another replacement model of the Galaxy Note 7 allegedly caught fire in Korea on October 11. (image: Yonhap)

SEOUL, Oct. 12 (Korea Bizwire) – Samsung’s decision to stop selling and producing its Galaxy Note 7 phablet might have been a smart move, as it showed the company wasn’t afraid to take big steps to correct its mistakes, and can now move on to focus on the success of future projects.

But what is more concerning, according to stock market watchers in Seoul, is not the imminent losses, but long term damage to Samsung’s global brand value, which was just recently announced to have exceeded $50 billion.

“Given that a smartphone is a consumer good, Samsung’s waning brand image could be a big problem,” said Roh Geun-chang, an analyst with HMC Investment & Securities. “Samsung will have to put in a tremendous effort to boost the safety of its future products.”

Another analyst, Lee Se-chul with NH Investment & Securities, said that “it would hurt most for Samsung, not the poor performance but the ruining of its brand image.”

According to Mr. Lee, the opportunity loss for Samsung’s decision to halt the phablet’s sales and production would amount to 700 billion won ($622.7 million) in Q4 2016 alone, and further forecasted the total losses from its latest crisis to likely grow, taking into consideration other factors like remaining inventory.

Suppliers of Galaxy Note 7 parts and other Samsung Electronics affiliate manufacturers are also expected to take a heavy blow from the recent crisis.

“Galaxy Note 7 parts manufacturers will see up to 10 percent decline in their Q4 sales compare to what was expected,” said analyst Song Eun-jung with Hi Investment & Securities. “Samsung’s key affiliate component manufacturers’ market capitalization has already declined by an average of 4.5 percent.”

Meanwhile, industry watchers forecasted that Samsung might launch its Galaxy S series earlier than usual to overcome its demise and boost its dwindling brand loyalty. The S7 series models were unveiled this year on February 22, and launched on March 11.

“Samsung’s biggest focus now is the Galaxy S8 series to be launched in Q1 2017,” said Kim Ji-san, a Kiwoom Securities analyst. “Boosting performance and polishing design is important, but quality maintenance should be their foremost priority.”

The share price of Samsung Electronics plummeted by 8.04 percent (135,000 won) on Tuesday, its biggest drop since the 2008 financial crisis, wiping out some 19 trillion won worth of market capitalization.