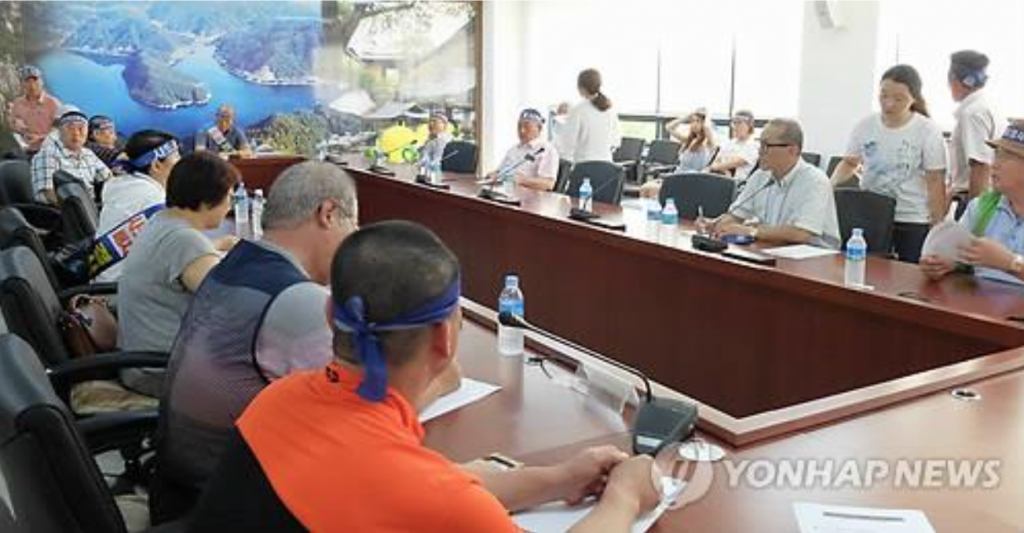 This photo, taken on Aug. 19, 2016, shows representatives of Seongju residents in talks to discuss issues related to THAAD deployment in the rural county. (image: Yonhap)

SEOUL/SEONGJU, Aug. 19 (Korea Bizwire) – Residents of Seongju said Friday that they can consider an alternate site for the the advanced U.S. defense shield if the government scraps its initial decision to place the system at an existing anti-aircraft missile base.

no final decision has been made, but a consensus has been reached to accept the government’s plan for the deployment if its preconditions are met in advance.

Under the original plan announced last month, the THAAD battery would be placed at the site of a South Korean air defense base by the end of 2017 to better protect the country from evolving North Korean missile and nuclear threats.

In a meeting attended by 25 key representatives of the local committee, participants said a new site can be examined if the defense ministry scraps its Seongsan-ri deployment plan, which is relatively close to the town of Seongju, 296 kilometers southeast of Seoul.

“We will continue talks tomorrow to discuss accepting a different site (within Seongju county but away from populated areas),” Kim Ahn-soo, chairman of the Seongju THAAD Cancellation Committee, told reporters.

Responding to the government stance, Moon Sang-gyun, spokesman for the Ministry of National Defense, reiterated the ministry’s official stance toward a third site for a THAAD battery.

“We don’t have any official comment on an alternate site for THAAD, as Seongju residents have yet to reach a final consensus on where they want to place the anti-missile system,” he said.

During his meeting with the representatives on Wednesday, Defense Minister Han Min-koo said the government will consider a new site for the THAAD battery if local residents reach a full consensus.

On July 8, the South and the United States announced the decision to deploy the THAAD missile defense system in South Korea.

Seongju residents initially expressed concerns about the high frequency electromagnetic fields generated by the THAAD system’s powerful X-band radar, which they feared could cause cancer and infertility, but more recently have expressed anger at the fact that the deployment decision was made “unilaterally” without any prior consultation with them over the plan.