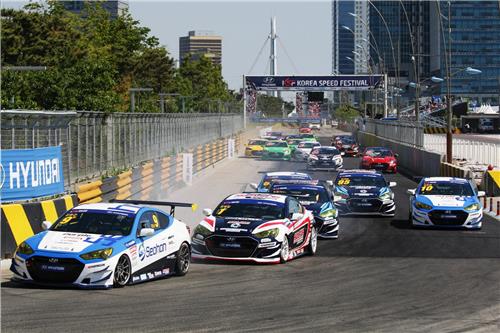 SEOUL, May 4 (Korea Bizwire) – Korea’s only in-city racing festival, The Brilliant Motor Festival 2016, will be held at the Songdo International Business District (SIBD) on May 21 and 22.

The event, which is celebrating its three-year anniversary this year, will be hosted by Hyundai Motors, the Incheon Free Economic Zone Authority, and the Incheon Development & Transformation Corporation.

The festival will host the second round of the KSF (Korea Speed Festival). The first round was held at Yeongam’s Korea International Circuit.

The championship round for the Genesis Coupe category will be held as a ‘night street racing’ event on the night of May 22. With various reflective panels and luminous materials applied to both the track and the vehicles, the race will present a fascinating spectacle of light, speed and sound.

For safety measures, the festival will allocate an additional 800 safety personnel for the night event. The circuit’s safety was approved by both KARA (Korea Automobile Racing Association) and the FIA (Federation Internationale de l’Automobile).

In addition to the second round of the KSF, the event will also host exhibitions of Hyundai’s high-performance N brand, as well as engineering classes for children.

Several K-pop artists are also expected to perform during the event.