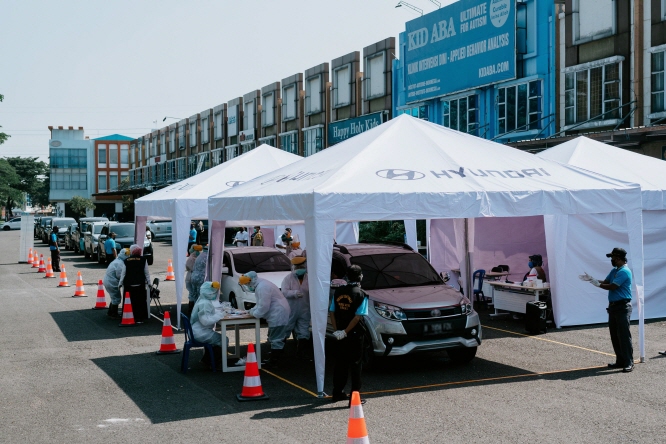 A drive-through COVID-19 screening center in Java, Indonesia, operated by Hyundai Motor Co., checks people for viral infections, in this photo provided by the South Korean carmaker on April 24, 2020.

SEOUL, May 27 (Korea Bizwire) — K-quarantine, referring to the South Korean system of fighting the coronavirus, is leading the war against the pandemic across Southeast Asia, raising the prospects for another surge of the ‘Korean Wave’ amid the coronavirus crisis.

The Strait Times, an English-language newspaper in Singapore, reported Tuesday that KK Women’s & Children’s Hospital in there set up an automatic sterilization system for handrails in one of the escalators inside the building as concerns were raised about handrails acting as a vector of transmission for COVID-19.

The hospital plans to assess the effectiveness of the system over the next month.

The device sprays an antiseptic solution for primary sterilization while UV LED lights act as a secondary disinfectant, with the system reportedly capable of killing more than 99 percent of all germs and viruses.

The Strait Times introduced South Korea’s Smart With Innovation Technology (SWIT) as the developer of the automatic sterilizer, which has gained popularity at shopping malls in South Korea, Thailand, and other countries.

Staus, a South Korean manufacturer, recently exported 50 modular negative pressure isolation units to Singapore. The Singaporean government plans to use the units as student dormitories once the coronavirus crisis comes to an end.

Additional exports will be made possible if Singapore is satisfied with the units.

To make effective use of the patient-tracking apps, Singaporeans must follow the example of South Koreans, who have been diligent in installing and using the apps, Lee said. 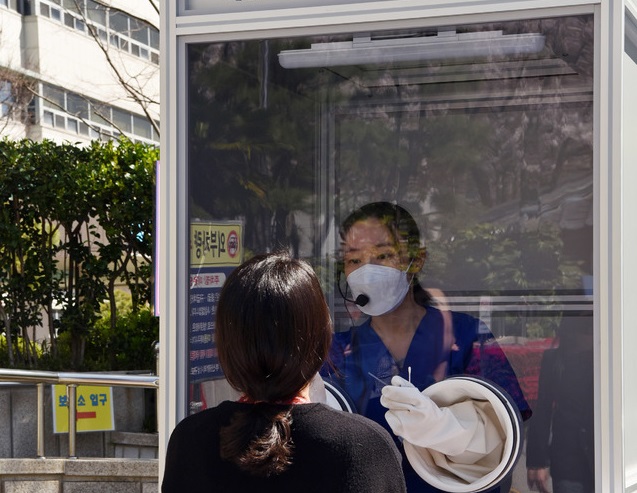 The person conducting the test remains inside the room and test subjects walk pass the booth for testing. (image: Nam-gu Public Health Center)

A ‘walk-through’ booth, another product of K-quarantine creativity, is also gaining popularity in Southeast Asia.

A medical staffer, working inside the booth, collects test samples from people standing outside.

The booth significantly reduces the time needed for collecting samples and sterilization, and is capable of testing a person every 15 minutes.

A ‘drive-through’ testing system, a South Korean medical invention that gained global attention amid the coronavirus crisis, went viral in Indonesia and Thailand.

Other medical devices, such as Korean-made test kits, are also being sent to Southeast Asian countries either as exports or donations.