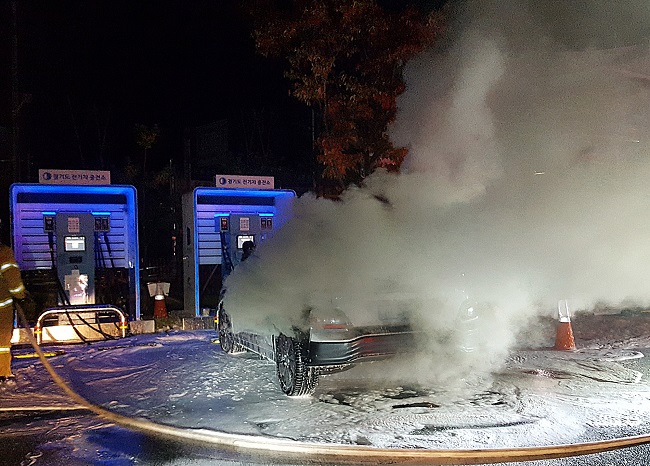 This photo taken on Oct. 17, 2020, and provided by a Namyangju fire station shows a Kona Electric vehicle after it caught fire while charging at a parking lot in Namyangju, just east of Seoul.

As EV batteries are being spotlighted as a primary cause of fires among EVs, both car manufacturers and battery makers are facing criticism.

If batteries are confirmed to have caused the fires, battery makers may be on the hook for massive recall costs.

Battery makers argue that it is too early to decide on the battery question since the cause of fires has yet to be confirmed.

An EV contains a variety of components including battery cells, a battery pack, a battery management system, a cooling system and others, making it difficult to pinpoint the battery itself as the cause of a fire.

There have been a series of fires related to gasoline combustion engines, and fires among EVs have not exceeded that in proportion, which is why many believe that recent fires won’t hurt EV sales.

Many experts see it as a developmental process which the EV market, including both car and battery manufacturers, must go through.

“South Korea is home to both global automobile manufacturers and a battery supplier, so these fires can be particularly sensitive,” an industry source said.

“In order to lead the EV market, efforts should be made to locate the exact cause of these fires, and reaffirm safety to reassure consumers.”