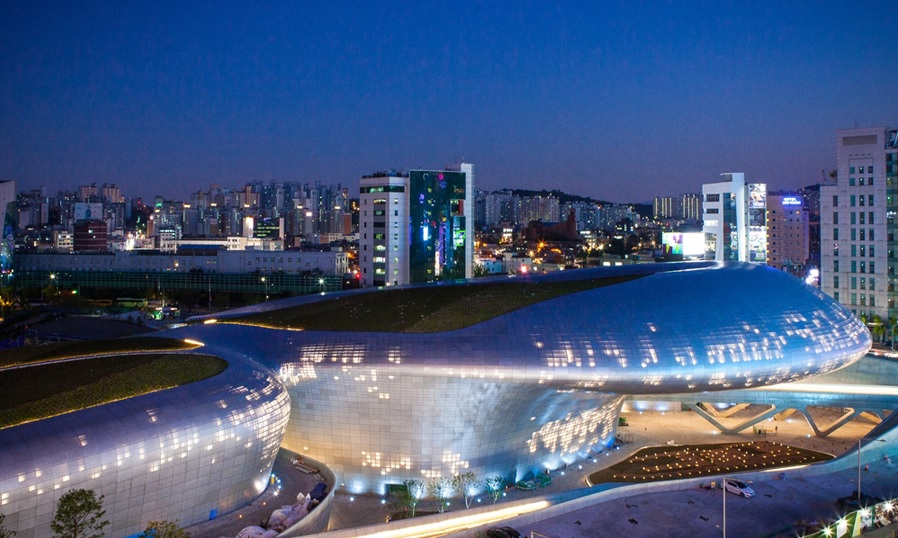 Given that the Dongdaemun Design Plaza admitted 150,000 visitors last weekend alone, it is expected the design plaza will no doubt contribute to revitalizing the commercial activity in the district. (image: Seoul Metropolitan Government)

For the first few days the area was crowded with visitors to see the newest landmark while shopping in the plaza’s basement and nearby shopping malls. In contrast, however, old shopping venues in Dongdaemun, such as Pyeonghwa Market, haven’t been able to benefit from the new attraction.

As of the end of 2013, there were as many as 35,000 small and large stores in Dongdaemun in 36 shopping centers, employing 125,000 people. The number of daily human traffic is in excess of 1 million. Given that the Dongdaemun Design Plaza admitted 150,000 visitors last weekend alone, it is expected the design plaza will no doubt contribute to revitalizing the commercial activity in the Dongdaemun district.

But the benefit would be limited to the merchants in fashion shopping malls such as Migliore and Duta right in front of the design plaza, as well as restaurants and cafes nearby. Meanwhile, those in old shopping centers said they haven’t seen any increase in foot traffic since the opening of the plaza.

Most of the merchants at Pyeonghwa Market were watching TV or even taking a nap as there were only few customers walking by. Even when there were customers, they were mostly those in their 50s or 60s. There were no young customers making a special trip to this far–albeit less than 1 kilometer away–from the main attractions.

Most merchants were saying the same thing: “The opening of the design plaza wouldn’t make any difference to us.”

Even some of them voiced concern that the spike in foot traffic may be short-lived. Right now there are many people coming to see the landmark because of special events and discount offers. But soon their interest will peter out and the things will get back to business as usual.