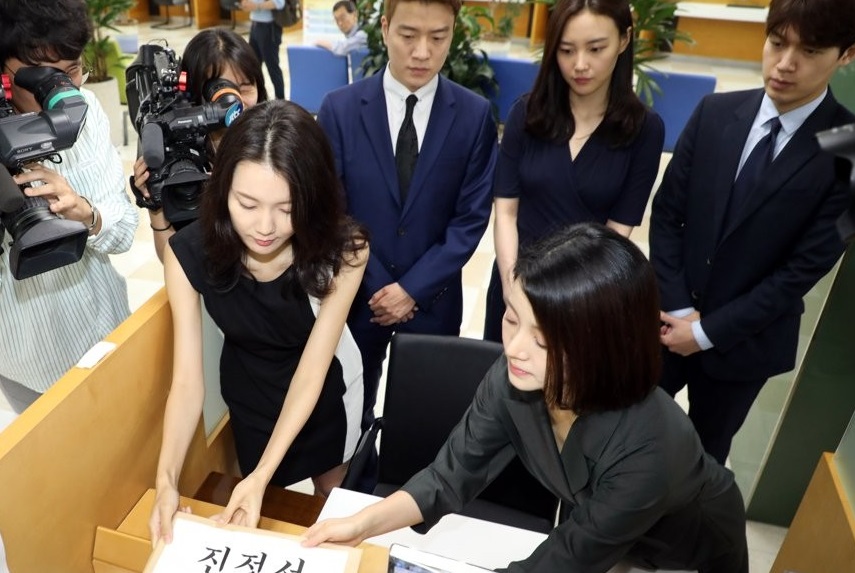 A group of nonregular announcers with broadcaster MBC files a petition against workplace bullying with a state labor office in Seoul on July 16, 2019, as a new law aimed at preventing harassment in the workplace takes effect in South Korea. (Yonhap)

SEOUL, Jul. 17 (Korea Bizwire) — The new legislation that came into effect on Tuesday that prohibits harassment in the workplace is expected by many to put a stop to verbal abuse, ostracism, and other malpractices.

The controversy over what constitutes harassment in the workplace, however, is likely to continue.

For instance, asking male employees to replace the heavy water bottles for water dispensers can constitute a form of harassment, as argued by legal experts.

The new legislation defines workplace harassment as an act of incurring physical or mental suffering or a worsening of the work environment by employers or workers using their status or power to behave beyond the scope of working norms.

According to the definition, collective pressure, age, education, gender, hometown, race, and other factors that compel someone to become less inclined to oppose or reject a certain action can be seen as harassment.

Lawyers Cho Sang-wook and Kim Wan-soo explained that in an organization where females form the majority, delegating certain tasks, such as lifting water bottles, to male employees may be seen as harassment.

From the standpoint of individual versus organization, it becomes more so if the task becomes repetitive and excessive.

If the task, however, falls short of meeting these requirements, it is more likely a problem caused by how the organization distributes work to its employees, not harassment, said the lawyers.

The Ministry of Employment and Labor makes it clear that actions that are difficult to consider as being necessary for the work of the company based on social norms constitute a behavior ‘beyond the scope of working norms.’

One instance could be repetitive and specific requests to deal with matters of privacy that go beyond the acceptable scope of human relationships.

“The current labor standard act stipulates that harassment in the workplace should first be reported to the employer,” said Company Harassment 119, a civil group.

“If the employer fails to properly address the case or treats the victims and the informant wrongfully, report the case to the Ministry of Employment and Labor.”