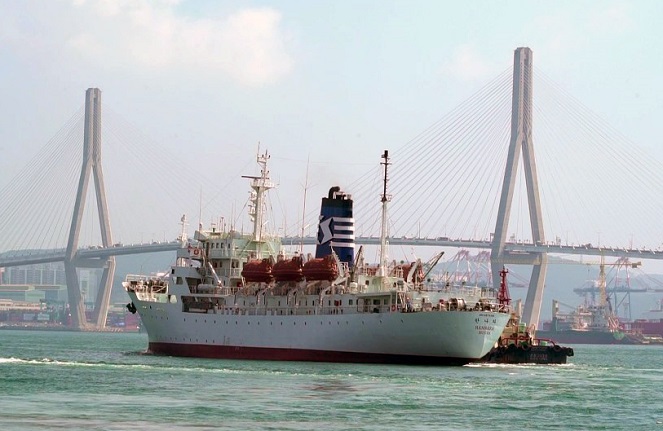 The retired marine training ship Hannara departs the South Korean port of Busan for the Vietnamese port of Haiphong, on Sept. 15, 2020. (Yonhap)

BUSAN, Sept. 16 (Korea Bizwire) – The retired marine training ship Hannara, which has been used by the Korea Maritime and Ocean University, left the South Korean port of Busan to complete its new mission on Tuesday.

The training ship is set to arrive at the port of Haiphong, the largest trading port in Vietnam’s northern region, in seven days.

The vessel is under the command of a South Korean captain and 11 crew members who will deliver the ship to the Vietnam Maritime University and transfer their operational know-how.

The South Korean government agreed to free transfer of the training ship to Vietnam in an official development assistance format to help nurture marine seafarers in Vietnam.

Vietnam, which has had difficulty in nurturing marine engineers due to a shortage of large training ships, asked South Korea for assistance and the two countries inked an official agreement on the transfer of the training ship in 2019.

The Ministry of Oceans and Fisheries decided to provide a wide range of support, including seafarer training ships, marine equipment and know-how on the education of seafarers.

The training ship Hannara played a key role in nurturing high-caliber marine engineers at the Korea Maritime and Ocean University for about 27 years from 1993 to May 2019 when it was retired.

The 3,640-ton training ship can accommodate 50 crew members and 152 trainees.