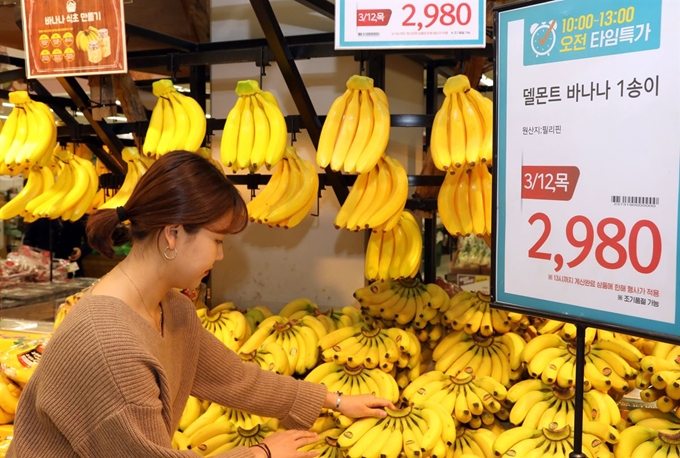 A shopper picks up bananas at an E-Mart in Seoul in this photo provided by the company.

SEOUL, Feb. 24 (Korea Bizwire) – The prices of imported fruits and beef in South Korea are higher than in any other country, a consumer advocacy group said Tuesday.

The domestic prices of such items were more than 1.5 times more expensive than the average prices of the ten major countries.

In all eight of the categories of imported fruits, the domestic prices were the highest or second highest among the 10 countries.

The prices of imported bananas, pineapples, grapefruits and mangoes were the highest in Korea.

The prices of Red Globe grapes, lemons, oranges and kiwis in Korea were the second highest among the 10 countries.

Consumers Korea said that the prices of the fruits for which Korea relies on imports due to low self-sufficiency rate were higher in Korea than in other countries.

2 thoughts on “S. Koreans Pay the Highest Prices in the World for Imported Fruits”