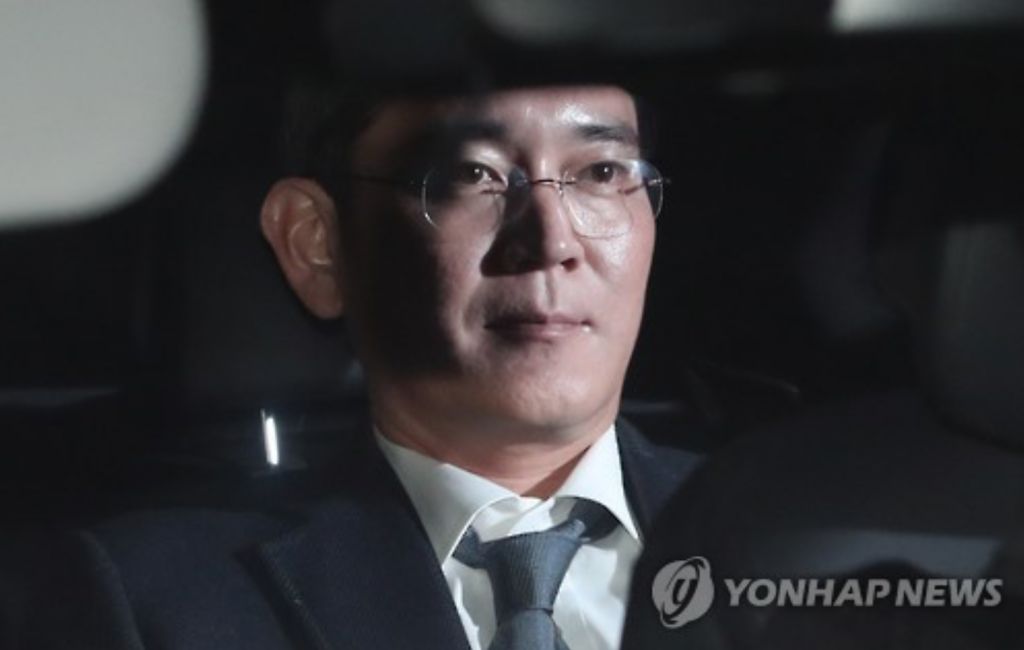 This photo, taken on Feb. 16, 2017, shows Lee Jae-yong, vice chairman of Samsung Electronics Co. in a car taking him to a detention center, south of Seoul. (image: Yonhap)

With the Seoul Central District Court issuing the arrest warrant, Lee, vice chairman of Samsung Electronics Co., became the first leader of the country’s largest business group to be detained in a criminal probe.

The investigation team, led by Independent Counsel Park Young-soo, requested the writ for a second time on Tuesday — less than a month after its first request on Lee’s charges of bribery, embezzlement and perjury was turned down.

In their second pursuit of the warrant, the prosecutors leveled more charges against the tycoon, including hiding criminal proceeds and violating the law on transferring assets abroad in the process of giving bribes to the president’s friend Choi Soon-sil.

“The rationale for and the necessity of (Lee’s) arrest is acknowledged considering the new charges and additional evidence collected,” the court said in a text message sent to reporters.

The court, however, rejected the request for a warrant to arrest Samsung Electronics President Park Sang-jin, saying it is difficult to recognize the need for his detention.

Following the court’s decision, Lee is to stay at a detention center in Uiwang, south of Seoul, where he had been waiting for the ruling.

Prosecutors have suspected that Lee gave or promised some 43 billion won (US$36.3 million) worth of bribes to Choi in exchange for the government’s backing of a merger of two Samsung affiliates in 2015.

The business arrangement was seen as critical for the smooth management succession of the group from ailing Samsung Electronics Chairman Lee Kun-hee to his only son Jae-yong.

Samsung has admitted to making contributions to two nonprofit foundations allegedly controlled by Choi and her Germany-based firm, but denied such contributions were related to the 2015 merger.

The Samsung scion was questioned a second time on Monday as special prosecutors accelerated their investigation into the highly-charged case with their initial probe deadline set for Feb. 28.

The investigation team on Thursday asked Acting President and Prime Minister Hwang Kyo-ahn to extend the probe by a month, but it remains to be seen whether Hwang will approve the request for an extension.

Lee’s arrest is expected to deal a blow to the president who has repeatedly denied allegations that she had colluded with Choi in extorting massive amounts of money and favors from local conglomerates, including Samsung.

Park, who was impeached by the National Assembly in December last year, is awaiting the Constitutional Court’s decision on whether to uphold her ouster.

The arrest was a much-needed shot in the arm for the investigation team, which faced a setback on Thursday as a Seoul court refused to allow it to search the presidential office Cheong Wa Dae for evidence on the highly-charged scandal.

“The rise in uncertainties and the decline in credit ratings, which could be triggered by the potential leadership vaccuum in Samsung, the Republic of Korea’s representative global company, could pose a great burden to our already sluggish economy,” an official at the Korea Employers Federation told Yonhap News Agency, declining to be named.