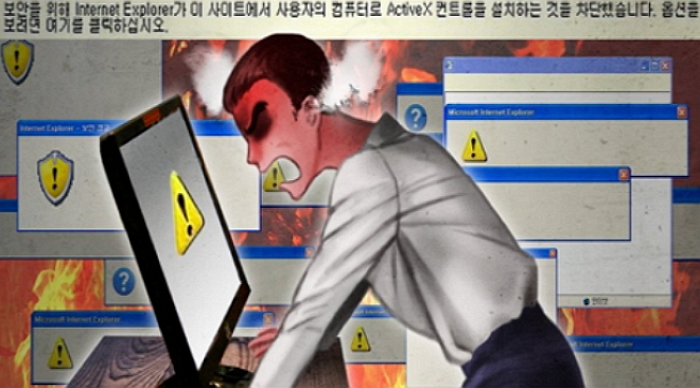 According to the Financial Supervisory Service (FSS) on Monday, the number of financial institutions allowing customers to verify their identity for money transfers through means other than the government-approved ‘Digital Certificate’ has risen to 15, a big increase compared to 10 last October. (Image: Yonhap)

SEOUL, Sept. 4 (Korea Bizwire) – An increasing number of South Korean banks are doing away with the country’s official identity verification process, which has long been criticized as ‘too complicated’ and ‘exhausting’, while being encouraged by financial authorities to do away with the excessive use of ActiveX, a software framework often slammed as ‘headache-inducing’.

According to the Financial Supervisory Service (FSS) on Monday, the number of financial institutions allowing customers to verify their identity for money transfers through means other than the government-approved ‘Digital Certificate’ has risen to 15, a big increase compared to 10 last October.

Among the banks offering a mobile text verification system is KEB Hana Bank, while Kakao Bank and Busan Bank allow clients to use Kakao Talk.

KB Bank has adopted a QR code system, while biometrics technology such as fingerprint verification is also becoming increasing popular.

According to the FSS, 13 biometrics identity verification systems are set to be introduced by the end of the year, while banks and the financial services industry are pushing for a joint private verification system using blockchain technology.

“Though it might be necessary in some cases for the security aspects of electronic financial transactions, we are going to increasingly replace ActiveX, which has poor compatibility with other systems that require fewer .exe files like HTML5,” the FSS said.

Financial services companies are also increasingly preferring simple security software for their websites, within reasonable means, for the purpose of improving customer convenience.

Menus that require the installation of a security protection program from online websites in the banking and finance industry are on the decline also, with the number dropping to 47.3 in August from 55.6 percent last October.

“Only two banks and two other insurance companies require security software for all the menus on their websites. With plans to get rid of the required security programs, customers in the financial services sector will no longer experience inconvenience,” the FSS said.

With the exception of unique security vulnerabilities, including increased susceptibility to hacking, for instance, the FSS has also revised many of the online financial services so customers can decide whether to set up a new security protection software or not, with Hana, Daegu, Kwangju, JB and NH Bank on board with the new initiative.