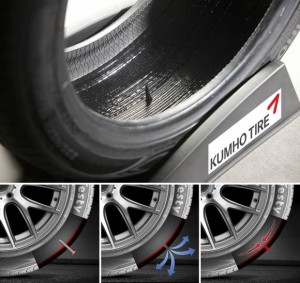 Kumho Tires has launched a new line of self-sealing tires on January 3 aimed at the replacement tire market.(image:Kumho Tire)

SEOUL, Korea, Jan 14 (Korea Bizwire) – There are more cars in the market with tires that keep running even after they are punctured. Such tires are divided into two types: run-flat tires and sealant tires. Run-flat tires have self-supporting rubber strips in the side walls of the tire, which enables the vehicle to continue to be driven at reduced speeds at about 80 km per hour. Beginning with the 1999 Roadster Z8 model, BMW is using run-flat tires in all models except the M-Series models.

Sealant tires, or self-sealing tires, contain an extra lining within the tire that self-seals in the event of a small hole due to a nail or screw. In this way, the loss of air is prevented from the outset such that the tire is either permanently self-repairing or at least loses air very slowly. Volkswagen is currently selling its new CC and Passat models equipped with self-sealing tires.

Korean car makers are also fitting some of their high-end models with self-sealing tires. Since 2011 Hyundai Motor began equipping its Equus model with 19-inch self-sealing tires, followed in 2012 by Kia Motors that offered Continental sealant tires to all K9 cars over 3.8 liters.

In order to preempt the market, Kumho Tires has launched a new line of self-sealing tires on January 3 aimed at the replacement tire market. The company said its price is set competitive enough at 400,000 won each, comparing to about 500,000 to 600,000 won for import brands.