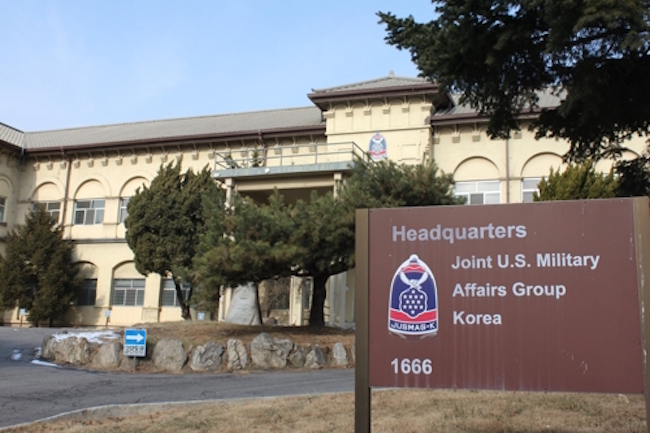 American troops in Seoul have been hard pressed to move out of their 2.7-million-square-meter base in Yongsan, the central part of the capital, since the inception of the liberal Moon Jae-in administration in May, according to multiple sources. (Image: Yonhap)

The Yongsan base relocation is another tough task, probably a source of stress for the commander who often emphasizes the importance of the robust alliance to “fight tonight.”

American troops in Seoul have been hard pressed to move out of their 2.7-million-square-meter base in Yongsan, the central part of the capital, since the inception of the liberal Moon Jae-in administration in May, according to multiple sources.

The government has pushed for a speedy and thorough relocation of the base, contrary to a rather “lenient” approach by the previous conservative administrations of Lee Myung-bak and Park Geun-hye over the past decade.

The Eighth Army moved to Camp Humphreys, a new USFK hub base 70 kilometers south of Seoul, earlier this year. Camp Coiner, a USFK site to be turned into a U.S. Embassy compound, is in the shutdown process. Its main gate was closed in early December.

“The Yongsan base relocation is scheduled to be completed by the end of next year,” said a Ministry of National Defense official in charge of the issue.

The USFK is apparently pressed for time, as it regarded 2019 or 2020 as the deadline amid a slow-moving transition over the last 10 years.

Furthermore, its plan to maintain the headquarters of the allies’ Combined Forces Command (CFC) and the Dragon Hill Lodge hotel has suffered a setback. 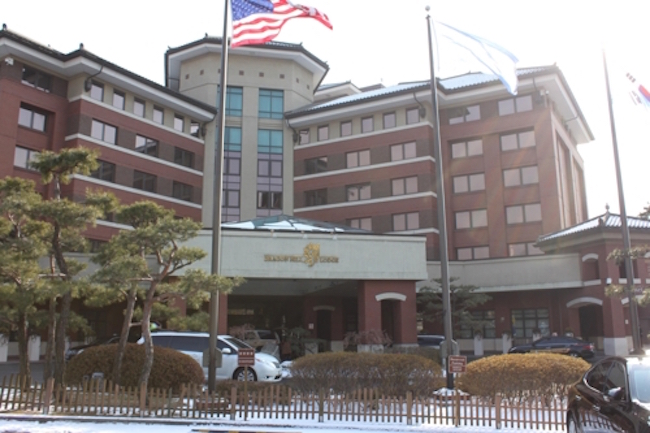 Furthermore, its plan to maintain the headquarters of the allies’ Combined Forces Command (CFC) and the Dragon Hill Lodge hotel has suffered a setback. (Image: Yonhap)

“South Korea wants the USFK to empty the Yongsan base, including the CFC in the Main Post and the Dragon Hill in the South Post,” an informed source told Yonhap News Agency.

It means a reversal from a 2014 deal between the allies to allow the U.S. to retain some facilities at the base, formally named the U.S. Army Garrison Yongsan.

The USFK reportedly hopes to keep some troops at the existing CFC building and use the hotel as a liaison office for them.

But South Korea has asked the U.S. to transfer the CFC headquarters to the country’s Joint Chiefs of Staff building in the other part of Yongsan, according to another source.

“Defense Minister Song Young-moo delivered the position to Gen. Brooks in their recent meeting,” added the source. “The Ministry of National Defense’s U.S. policy division is in consultations with the CFC over the matter. There will likely be a related agreement in the not so distant future.”

Both time and money are a problem. The USFK dismissed a view that it’s dragging its feet.

“We are willing to relocate the base as agreed,” a USFK spokesperson told Yonhap. “However, it’s a very complicated and time-consuming issue, especially as a number of key American service members here also work at the CFC. Relocating the CFC is different from moving the Eighth Army.”

For instance, Brooks doubles as head of the CFC. 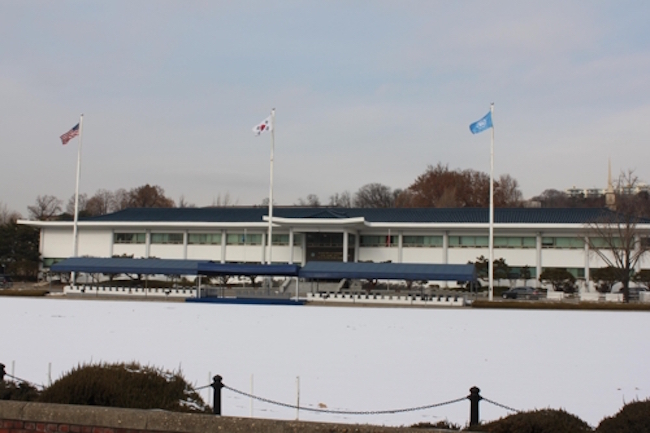 But South Korea has asked the U.S. to transfer the CFC headquarters to the country’s Joint Chiefs of Staff building in the other part of Yongsan, according to another source. (Image: Yonhap)

There’s an underground bunker at the CFC headquarters, which is packed with sophisticated systems.

“Right next to the CFC building, a U.S.-only area is located that is off limits to Koreans. It’s not a simple matter to move the facility,” a defense source said. “The U.S. hopes South Korea will share the financial burden for transferring it.”

The Moon administration believes that the USFK has been granted enough time for the relocation agreed in 2004 and originally slated to finish by 2008.

The transition had been long delayed amid Seoul’s repeated pursuit of postponing the transfer of wartime operational control (OPCON) of its troops from Washington. For now, the “conditions-based” OPCON transfer is virtually an open-ended goal.

Government officials here also pointed out South Korea has already paid more than 90 percent of the cost of the expansion of Camp Humphreys, which totals US$10.7 billion.

The Moon administration is eager to turn the vast swathe of land in Yongsan into a family park as early as possible.

There’s a rumor that Im Jong-seok, presidential chief of staff who served as vice Seoul mayor from 2014 to 2015, is behind the drive.

Once the relocation is completed, the Foreign Ministry will start negotiations with the USFK on the base’s return in accordance with the bilateral Status of Forces Agreement (SOFA) followed by a joint environmental survey.

The Ministry of Land, Infrastructure and Transport is officially in charge of implementing the development project and it’s accelerating relevant preparations.

The ministry plans to open some available locations first to citizens, including the residential area in the South Post that is deemed relatively less polluted.

The Cultural Heritage Administration has already done a preliminary on-site inspection of the area to be handed over to South Korea.

In the early 1900s, it was a base for Japan’s imperialist military. American troops took over the site in the wake of Korea’s liberation from Japan’s colonial rule from 1910-45.

“The government requested the USFK to leave everything that existed before its presence as it is,” the defense ministry official said. “The government plans to preserve those sites with historic value.”