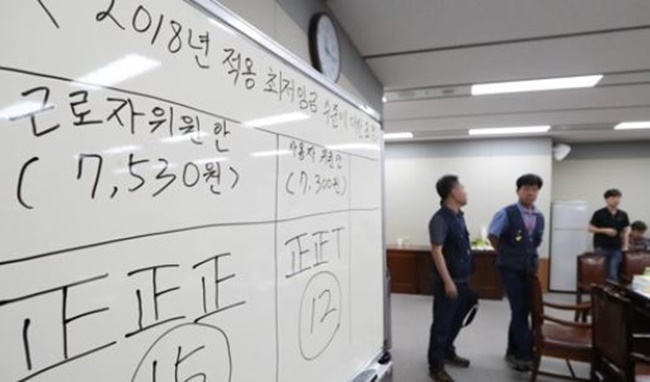 In 2016, when the modest annual minimum wage hike prompted anger from employees, keywords used from the perspective of workers such as ‘discrimination’ and ‘unpaid’ dominated the internet. (Image: Yonhap)

SEOUL, Jul. 25 (Korea Bizwire) — Since the announcement last week of a 16.5 percent hike to the minimum wage that was met with cheers and praise, some South Koreans are now expressing worries over possible job cuts in the wake of the increase, according to a big data analyst.

Despite the highest wage hike in the past 17 years, big data analyst Daumsoft says the word ‘minimum wage’ on the South Korean web – including social media services such as Twitter – was used more often negatively between 2015 and last month, with the ratio of negative to positive being 6 to 3.

Between July 15 and 19 this year, during which talk of next year’s minimum wage hit its peak in volume, the word ‘minimum wage’ was used in a negative light more often, associated with related words like ‘burden’, ‘worries’, ‘side effect’, and ‘controversy’, the big data analytics company said.

In 2016, when the modest annual minimum wage hike prompted anger from employees, keywords used from the perspective of workers such as ‘discrimination’ and ‘unpaid’ dominated the internet.

Following the announcement of the record high minimum wage hike last week however, keywords such as ‘burden’ and ‘worries’ were plastered across the internet between, representing the voices of employers who widely oppose the government’s firm stance to raise the minimum wage over the next few years.

“As the government focuses on increasing the minimum wage as well as giving full-time positions to contract workers, online posts expressing frustration on the part of small and medium-sized enterprises and business owners are increasingly common,” Daumsoft said.

“The fact that ‘franchise’ and ‘affiliate’ appeared as a related keyword to minimum wage marks the (financial) predicament facing franchise businesses that rely on part-time workers.”

Findings from a survey conducted by part-time job searching website Albamon also revealed over half of part-time workers fear job losses as a result of the drastic hike in the country’s minimum wage for next year.

The survey, which was conducted with a sample of around 4,000 part-time workers and 656 employers, showed over seven in ten workers have concerns over the newly established minimum wage, while the figure for employers stood at over 90 percent.

When asked about the likelihood of the Moon administration delivering on its promise to raise the minimum wage to 10,000 won by 2020, over seven in ten employers said the plan was ‘realistically impossible’, while over six in ten part-time workers said it was ‘more than achievable’.