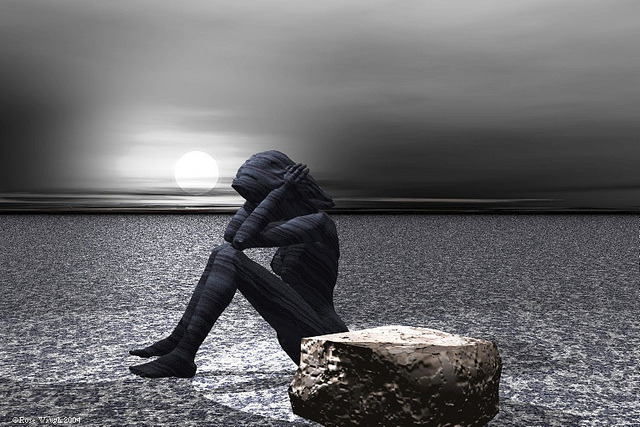 SEOUL, July 4 (Korea Bizwire) – While a recent OECD study showed that life expectancy in Korea has rapidly increased for the past five years, it displayed a shameful aspect of the nation as well, as it revealed that Korea has again, for 10 years in a row, ranked first in suicide rate in among 34 OECD member countries.

According to “OECD Health Data 2014” (based on statistics from 2012) published by the Ministry of Health and Welfare, the life expectancy in Korea was 81.3 years, which was 1.1 years longer than that of OECD average (80.2 years). It also was raised by 1.9 years during the past five years, while the OECD average life expectancy gained 1.2 years during the same period.

However, the death rate by suicide in Korea was 29.1 per 100,000 populations, which was 17.0 higher than the average suicide rate of OECD (12.1). Even though it has dropped from that of 2011, which was 33.3, Korea still possesses the highest suicide rate among OECD countries. The nation with the lowest suicide rate was Turkey, with 1.7. 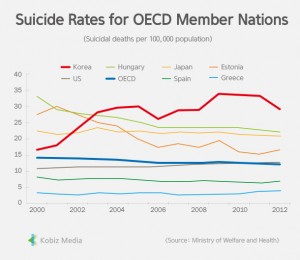 The death rate by cancer was 183.3 per 100,000 populations in Korea, which was 24.2 persons lower than that of the OECD average and the sixth-lowest number among those of OECD countries.

On the other hand, the data showed that Korea was among the highest in smoking rate and its alcohol consumption was along the average of OECD. Annual liquor consumption per person of Korea was 9.1 liters, which was similar to that of OECD average (9.0 liters).

On a separate note, the obesity rate in Korea was located at the bottom part of the pile. The ratio of overweight or obesity was 31.8 percent, the second-lowest among OECD member, next to Japan.

The total amount of medical expenses of Korea in 2012 was tallied to be 97.1 trillion won, approximately 7.6 percent of the nation’s GDP, which means that on average 1.94 million won was spent in medical care per person. This was a 5.5 percent increase from the last year’s per-capita medical expense, which was 1.84 million won.

Although Korea’s ratio of total medical expense in the GDP was lower than that of the OECD average (9.3%), the increase rate was the highest among the OECD members.

The data also showed that Koreans sought medical examinations most frequently in a year among OECD members as it said that Koreans went to see a doctor on average 14.3 times per year, 2.1 times more than the OECD average.