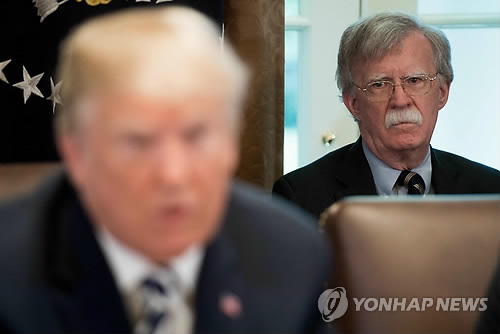 Tom Z. Collina and Catherine Killough, the writers of the opinion article, are avid supporters of denuclearization efforts.

They work for Ploughshares Fund, a public grantmaking organization that supports initiatives to prevent the spread and use of nuclear weapons.

The writers claim that Bolton’s notion of focusing on “how to pack up [North Korea’s] nuclear weapons program” for the summit with North Korea was “unrealistic.”

Collina and Killough say that such unrealistic expectations would not only push the U.S-North Korea summit to failure, they could even lead to war.

Considering Bolton’s past comments on possible military strikes against North Korea, “this could be what he [Bolton] wants,” according to the article.

As North Korean diplomat Kim Kye-gwan warns of “reconsidering its proceedings to the summit,” he also pointed his finger at Bolton for a series of comments made by White House officials who have contributed to the sudden stalemate in the talks.

Kim went on to publicly show his disapproval for Bolton, who has recently been tapped by President Trump as national security advisor, saying “we [had] shed light on the quality of Bolton already in the past, and we do not hide a feeling of repugnance toward him.”

Ill will between North Koreans and Bolton dates back to 1994, when the Geneva Agreement was called off between the two states.

Bolton has been identified as the cause of the termination of the agreement, opting to end talks based on information on North Korea’s uranium program rather than to continue negotiations.